Items related to Century of the Soldier (Monarchies of God)

Paul Kearney Century of the Soldier (Monarchies of God)

Century of the Soldier (Monarchies of God) 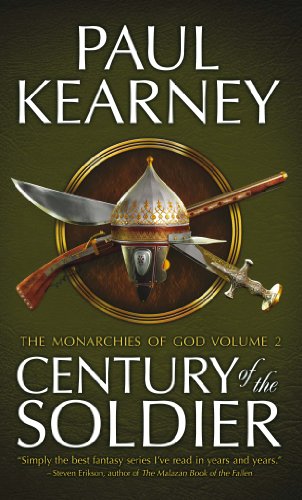 THE TIME OF THE WOLF IS AT HAND... Struck down in his moment of victory, Hebrion's young King Abeleyn lies in a coma, his city in ruins and his fiancée and former lover vying for the throne. Corfe Cear-Inaf, now a colonel, is given a ragtag command of ill-equipped savages and sent on a hopeless mission by a jealous King who expects him to fail. Richard Hawkwood and Lord Murad return bearing news of horror on a savage new continent, with something terrible lurking in the hold. The Church is tearing itself apart, even as the champions of truth fight to bring peace between Ramusian and Merduk; but in the far West, a terrible new threat is rearing its head... The Century of the Soldier collects the final three books in Paul Kearney's explosive The Monarchies of God series, revised and expanded for this edition: The Iron Wars, The Second Empire and Ships From The West.

'Simply the best fantasy series I've read in years and years.' --Steven Erikson, author of The Malazan Book of the Fallen

'People don't just die in Kearney's novels, they die badly, with a credible but not overwhelming edge of pain and squalor.' --Infinity Plus

Paul Kearney was born and grew up in Northern Ireland. He lived for some years in Copenhagen, then spent two years in America before returning to Britain in 1998.

1. The Century of the Soldier

2. The Century of the Soldier

Book Description Rebellion. Paperback. Condition: New. New copy - Usually dispatched within 4 working days. By the mid-sixth century of Ramusian reckoning the great struggle is approaching its climax. For the victor there will be supremacy; for the vanquished, cultural annihilation. Fighting that war, Corfe of Torunna will find that court intrigue can be as murderous as any martial foe. Seller Inventory # B9781907519086

3. Century of the Soldier (Monarchies of God)

4. CENTURY OF THE SOILDER