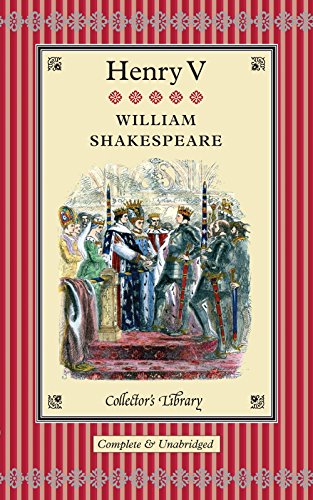 'Once more unto the breach, dear friends, once more.' This edition of Shakespeare's Henry V is a pocket-sized, hardback volume containing the complete and unabridged text of the play, an introduction, a glossary of Shakespearean vocabulary and a bibliography. Published in the Collector's Library series, the book is linen-bound, with gilt-edged pages and a silk marker.

William Shakespeare was born in Stratford-upon-Avon, Warwickshire, in 1564. The date of his birth is not known but is traditionally 23 April, St George's Day. Aged 18, he married a Stratford farmer's daughter, Anne Hathaway. They had three children. Around 1585 William joined an acting troupe on tour in Stratford from London, and thereafter spent much of his life in the capital. A member of the leading theatre group in London, the Chamberlain's Men, which built the Globe Theatre and frequently performed in front of Queen Elizabeth I, Shakespeare wrote 36 plays and much poetry besides. He died in 1616.