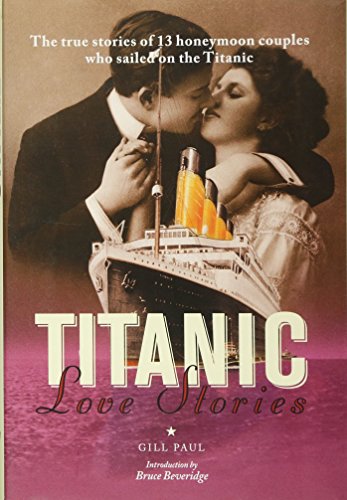 The sinking of the RMS Titantic was a terrible tragedy for all the 1,517 people who died - but the stories of the 13 brides and grooms who joined the ship to celebrate their honeymoons are especially poignant. They included multi-millionaire John Jacob Astor and his wife Madeleine, who had eloped to escape the gossip-mongers. Only Madeleine and their unborn child would make it home. Then there was Daniel Marvin, whole wedding to Mary Farquarson was the first recorded on film. The groom helped his young bride onto a life raft but refused to save himself. And there were Edward and Ethel Beane, who had saved up for six years to get married and lost everything on the Titanic. They survived, but refused ever to talk about what happened to them. These are profoundly moving stories of people thrown into life-or-death situations. Their actions are sometimes courageous, often surprising - but always memorable.

Excellent condition no markings inside or out or scuffs on the cover.

The poignant stories of the 13 brides and grooms who were on the "Titanic" when it sank. The grooms mostly perished. Edward and Ethel Beane, who had saved for six years to get married, both survived, but refused ever to talk about what had happened to them. --The Bookseller 08.07.11

It was on 10 April 1912 that the Titanic began its maiden voyage from Southampton to New York. Within four days the ship would founder with the loss of over 1500 lives. Among the people on board were thirteen newlywed couples, and it is their deeply poignant love stories that lie at the core of this engrossing new chapter of Titanic history. Some couples, like multi-millionaire John Jacob Astor and his young wife were simply enjoying a luxurious transatlanic voyage; for others it was the fruition of their plans for beginning a new life in America. Some perished, others survived, all were profoundly affected by the tragedy. --The Good Book Guide March 2012