Items related to Oblivion: A Memoir 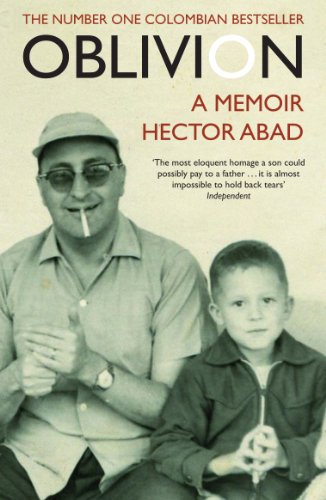 The Number One Colombian Bestseller
Oblivion is a memorial to the author's father, Héctor Abad Gómez, whose criticism of the Colombian regime led to his murder by paramilitaries in 1987. A work of deep feeling and consummate skill, it paints an unforgettable picture of a man who followed his conscience and paid for it with his life, during one of the darkest periods in Latin America's recent history.

Oblivion has been magnificently translated into English by Anne McLean, two-time winner of the Independent Prize for Foreign Fiction.

'The most eloquent homage a son could possibly pay to a father . . . it is almost impossible to hold back tears'
Independent

'A shattering chronicle of Colombia's violence, but also an inspiring tribute to tolerance and paternal love'
Guardian

'A powerful work of literature'
London Review of Books

'An unbearably moving, eloquent tribute to the author's father -- who was murdered by Colombian paramilitaries in 1987 -- that is fit to burst with love and pride.'
Sunday Telegraph

'It is very difficult to summarize Oblivion without betraying it, because, like all great works, it is many things at once. To say that it is a heartrending memoir of the author's family and father -- who was murdered by a hired assassin -- is true, but paltry and infinitesimal, because the book is also a moving immersion into the inferno of Colombian political violence, into the life and soul of the city of Medellín, into the private life and public courage of a family, a true story that is also a superb fiction due to the way it's written and constructed, and one of the most eloquent arguments written in our time or any time against terror as an instrument of political action'
Mario Vargas Llosa, winner of the Nobel Prize for Literature

'A great and deeply moving testament'
The Times

'A tremendous and necessary book, devastatingly courageous and honest. At times I wondered how he was brave enough to write it'
Javier Cercas

'Partly a portrait of a singular father and partly a wider landscape of a beautiful country, full of potential, tearing itself to pieces . . . The writing is as warm, generous and witty as the man it portrays'
Observer

'A beautiful and profoundly moving work . . . an irreplaceable testimony of the struggle for democracy and tolerance in Latin America'
El Pais --...

Héctor Abad Faciolince is one of Colombia's leading writers. Born in 1958, Abad grew up in Medellín, where he studied medicine, philosophy and journalism. Expelled from university for writing a defamatory text against the Pope, he moved to Italy, before returning to his homeland in 1987. After his father's murder in that year, he was forced into exile, living and teaching in Italy until 1992, when he returned again to Colombia. He is the author of several acclaimed novels.

Book Description Old Street Publishing, 2011. Paperback. Condition: Good. Good condition is defined as: a copy that has been read but remains in clean condition. All of the pages are intact and the cover is intact and the spine may show signs of wear. The book may have minor markings which are not specifically mentioned. Most items will be dispatched the same or the next working day. Seller Inventory # mon0013571738

Book Description Old Street Publishing, 2011. Condition: Good. A+ Customer service! Satisfaction Guaranteed! Book is in Used-Good condition. Pages and cover are clean and intact. Used items may not include supplementary materials such as CDs or access codes. May show signs of minor shelf wear and contain limited notes and highlighting. Seller Inventory # 1906964785-2-4