Items related to The Steaming Sixties: No. 6: From Woking to Weymouth... 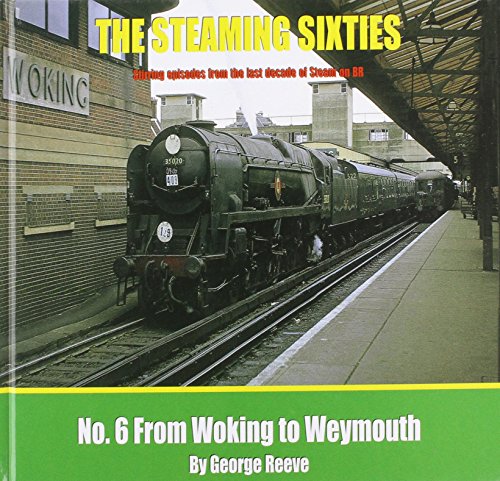 The Steaming Sixties: No. 6: From Woking to Weymouth

The Steaming Sixties - 6 - From Woking to Weymouth

Book Description Laminated Pictorial Boards. Condition: New. No Jacket. 1st Edition. 64 pages colour photos - How a boy's horizon has widened from those far off days. The height of adventure for us in 1964 was an afternoon/early evening session watching trains at Woking - the highlight of course being hauled by Pacifics there and back - something not possible anywhere much else in the country by then. A cheap day return from Streatham Hill was the order of the day (or rather long summer evening) which cost about 3/4d - I remember that because one day we didn't get the right train from Waterloo and to our horror the guard warned that 'next time he caught us' (and we believed him) he'd charge us the full adult fare of Waterloo to Woking which was 6/8d, a third of a pound and the price of a 45 rpm single. A faded and folded but precious relic, one of my surviving notebooks for 1964/65; on a special 25th May 1964 we left Waterloo (me, Les Hewitson, Les Tibble and Lucien Kmiotek) on the 4.15 behind 34005 BARNSTAPLE to arrive at Woking, returning behind 35019 FRENCH LINE CGT as dusk beckoned. But of the wider Southern beyond, we knew too little until our holiday in Bournemouth that same year, staying with another class mate, a one Robert Millard, and his aunt - a strange woman to say the least. The following summer the railway press (I've never been able to establish the veracity of this) announced that it 'was understood' that ten Duchess Pacifics might be coming from the London Midland Region 'to replace the Merchant Navy class on the Bournemouth line'. We were outraged!. Book. Seller Inventory # IR245