Items related to Mind-forg'd Manacles: Murder, Macpherson and the... 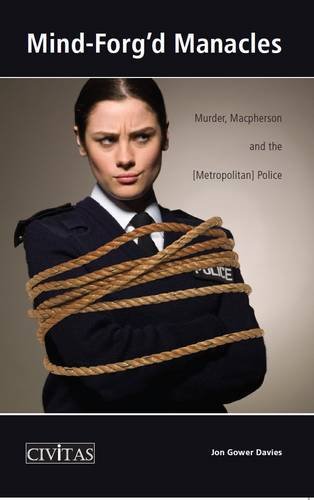 Mind-forg'd Manacles Argues that the charge of 'institutional racism' against British police forces was unfounded and harmed the police's ability to provide a public service to all. Full description

Jon Gower Davies retired from the University of Newcastle in 1997. He lectured, first, in the Social Studies Department, and then in the Department of Religious Studies, of which he was Head. For 20 years he was a Labour Councillor on Newcastle City Council. He is the author and editor of books and articles on a wide range of topics, including Bonfires on the Ice: the multicultural harrying of Britain and In Search of the Moderate Muslim, published by the Social Affairs Unit; A New Inquisition: religious persecution in Britain today and Small Corroding Words: The slighting of Great Britain by the EHRC, published by Civitas; and on attitudes to death and dying in the ancient religions of the world, published by Routledge. He has a particular interest in war and war memorials as definers of what he calls 'Eurochristianity'. He was born in North Wales. From there, after the war, he went with his family to Kenya, then a British colony. He lived in Mombasa, went to school in Nairobi, and travelled widely throughout East Africa. After a short spell in the Kenya Regiment, a part of the British Army, he left for England to attend Oxford University. Two years in America, which included attending Brandeis University and participating in the 'Freedom Summer' in Mississippi, ended with his return to England. Since 1965, he has lived in Newcastle upon Tyne with his wife Jean. They have three children, who now have children of their own. He is a communicant member of the Church of England.

Book Description Civitas, 2012. Paperback. Condition: Very Good. Very Good: a copy that has been read, but is in excellent condition. Pages are intact and not marred by notes or highlighting. The spine remains undamaged. Most items will be dispatched the same or the next working day. Seller Inventory # wbb0014678012

Book Description Civitas, United Kingdom, London, 2012. Paperback. Condition: Very Good. The Macpherson Report into the handling of the murder of Stephen Lawrence became a defining moment in British political history. It accused the Metropolitan Police of 'institutional racism', an ambiguous phrase that has been regularly confused with overt racism. The concept was used not only to condemn the Metropolitan Police, but also to condemn all British police forces. For many commentators, it condemned Britain as a whole as a racist society. In Mind Forg'd Manacles, Jon Gower Davies argues that the charge of institutional racism was ill-founded and that reforms designed to address it have introduced negative and unintended consequences for British policing. It has bogged down the police with unnecessary and counter-productive bureaucratic demands. It has paralysed the investigation of some crimes that involve ethnic minority suspects, frequently exposing vulnerable victims to greater harms. Davies presents an alternative, optimistic perspective on British society. Racism is, in fact, a rarity and its occasional appearance rightly condemned. The police are generally respected and trusted by British people of all ethnic origins. Imputing institutional racism to a whole society unfairly smears the majority of fair-minded people while removing moral responsibility from the minority of people who fail o measure up to British standards of equality. Davies concludes: 'Macpherson - not only obviated the need to make a realistic if less flamboyant analysis of the limitations of the policing of the murder of Stephen Lawrence, but also led an over-anxious police leadership to make a fool of itself by adopting policies which are neither operationally nor socially nor ethically sound and proper.'. The book has been read, but is in excellent condition. Pages are intact and not marred by notes or highlighting. The spine remains undamaged. Seller Inventory # GOR004196994