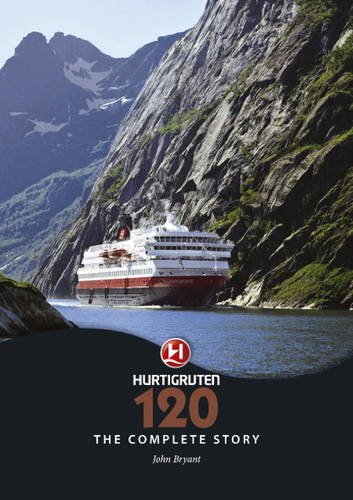 This edition of the Hutigruten 120 book covers a more detailed and comprehensive account of the history of this essential Norweigen service. Illustrated with many different photographs yo that of the edited version. The book also has detailed fleet lists, appendices and maps compiled by John Bryant. The title has many outstanding unpublished pictures and is a must for those who love this historical route.

The Hurtigruten is probably one of the most famous ferry routes in the world and has now developed into a popular route for cruising. Since its inception in 1893, the Hurtigruten has continued to fascinate and attract travellers from all over the world, sailing along a coastline which has no equal with over half of the journey north of the Arctic Circle. It is an intriguing tale about a unique transport artery which has a mission and a duty extending far beyond tourism, the Hurtigruten being an integral part of the coastal community from which it gains its livelihood. Today the Hurtigruten operates a fleet of modern cruise ferries and attracts passengers from all over the world. The book is incredibly well researched and describes the entire evolution of the company in minute detail. An appendix includes the details and history of every ship that has sailed on this service. A particularly pleasing feature of this book is the quality of the photographs, in particular of some of the older vessel that have operated on the route. This is a first class book and I would very highly recommend it to our readers. Shipping Today and Yesterday July 2013

John Bryant was raised in Folkestone, Kent and in his student days worked on the British Rail ferries which then operated out of nearby Dover. He has been a regular contributor to Ferry Publications since its very beginnings. Now retired after nearly 20 years as a Primary School Headteacher, this is his first major title for the leading publishers of maritime books. John knows the Hurtigruten well and the genesis for this book follows articles written for Ferry Publications on todays operation, together with a well received Photo Feature which appeared in their Ferry & Cruise Annual 2012. With his wife Cathy, John has lived in Crawley, West Sussex for over 35 years.

Book Description Paperback. Condition: Very Good. The book has been read, but is in excellent condition. Pages are intact and not marred by notes or highlighting. The spine remains undamaged. Seller Inventory # GOR006571445

Book Description Paperback. Condition: Used; Good. **Simply Brit** Shipped with Premium postal service within 24 hours from the UK with impressive delivery time. We have dispatched from our book depository; items of good condition to over ten million satisfied customers worldwide. We are committed to providing you with reliable and efficient service at all times. Seller Inventory # 1929154