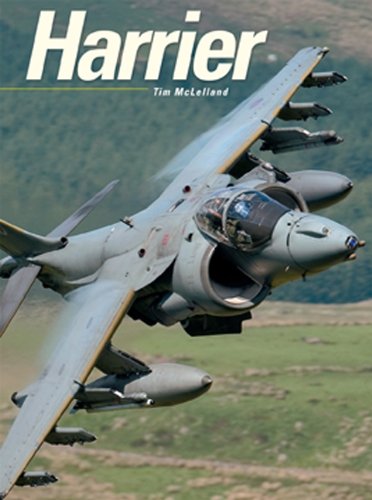 The world-famous Harrier is one of the most advanced and versatile warplanes of the post-war era, and one of the most revolutionary jet aircraft designs ever produced. Its unique ability to take-off and land vertically was vital to the Royal Air Force s capabilities during the long, dark years of the Cold War, enabling the RAF to support ground forces in the field, free from reliance upon large, fixed conventional airfields which were at risk of destruction by Soviet bombers. The Harrier s capabilities also enabled the Royal Navy to develop a fleet of Through Deck Cruiser aircraft carriers, each vessel equipped with specialised naval variants of the Harrier, capable of conducting fighter, attack and reconnaissance missions. Perhaps most significantly, the Harrier was also adopted by the United States Marine Corps and earned a place in history as one of only a few aircraft of foreign origin to be embraced by America s armed forces. Such was the Harrier s success that a completely new second-generation design was created, and this version of the aircraft remains in front line service with the USMC, while further examples of the design continue in active service in Italy, Spain, India and Thailand. Sadly, the fifty-year history of the Harrier witnessed the withdrawal of the RAF s and Fleet Air Arm s aircraft towards the end of 2010 as a result of sweeping defence expenditure cutbacks and it is with some irony that this magnificent example of British design technology no longer flies in British skies. But the Harrier is still in business, and looks set to remain part of the modern military landscape for some years to come. In this book leading aviation writer Tim McLelland not only explores the history of the Harrier s origins and development, as well as its variants, weapons and performance, but also provides informative personal accounts from pilots who have flown the Harrier operationally with the RAF and the USMC. The book culminates with a fascinating look at modern Harrier operations, combined with a colourful and exciting photographic celebration of the Harrier s illustrious military career. With a highly researched and detailed narrative, more than 400 superb photographs charting the Harrier s service, 45 colour artworks, technical drawings and pilot s notes, this book represents the most comprehensive single-volume coverage for the enthusiast and modeller.

The Hawker Harrier is one of the most well-known and distinctive military aircraft produced in the last 50 years. This title forms a comprehensive study of the aircraft's history, tracing the development and service deployment of this unique warplane, including coverage of combat operations, service with the United States Marines, and a first-hand detailed account of present-day Harrier operations as seen from the cockpit. As well as informative detail and descriptions the volume will be bundled with a variety of rare and unseen photographs, technical line drawings and colour artwork profiles. Some of the areas covered include - Vertical Variables Background to the Harrier's development, Manufacture of the prototype Service Coverage of the production of the first Harrier GR1 variants Introduction into RAF service at Wittering, Looking at the background, design and development of the Sea Harrier manufactured for the Royal Navy. Exploring present-day Harrier operations. A listing of Harrier production (serials, allocations and disposals) This will provide a detailed look at all aspects of the Harrier from development to present day to provide a detailed step-by-step description of a representative Harrier mission combined with from-the-cockpit photography.

Tim McLelland is an established aviation writer and photographer with an interest in all aspects of aerospace, specialising primarily in post-war military subjects. He has authored a wide range of books on a variety of subjects. He has also produced numerous features for many aerospace both in the UK and overseas. His contributions have appeared in magazines such as Aircraft Illustrated, Air Extra, Armed Forces, Air Forces Monthly, Flypast, Aviation News and many other well-known titles. Tim McLelland also edited Air Forces International magazine, and Scale Models magazine, in addition to the house magazine of the International Plastic Modellers Society (UK ).