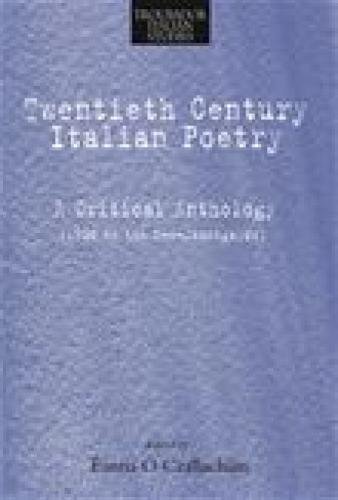 This anthology makes available a broad selection of modern Italian poems (in the original language), with detailed interpretative notes and commentary in English on all texts, and informative critical essays on individual authors and wider trends. The volume covers the period from the early years of the twentieth century up to the 1970s, and focuses primarily on the work of a limited number of major poets (such as Ungaretti, Montale, Saba, Sereni, Sanguineti, Zanzotto, Rosselli), but also includes several chapters giving representative texts from a wider range of authors (from Futurists, to Hermetics, to the Neo-Avantgarde). A general introduction explores some of the issues underlying the variety of formal and thematic approaches encountered in the texts, as well as tracing different possible interpretative pathways and groupings of poets and their works under chronological, ideological and other frameworks. A key aim of the book is not merely to present the texts, but to provide tools for the reader to access them, whether through the elucidation of individual words and phrases or in terms of contextual information, conceptual orientation and interpretative keys (notes are supplemented by extensive suggestions for further reading). Thus the anthology seeks not only to open up these poems for the reader on the level of literal meaning, but also to invite, or indeed demand, a critical reading of the poems themselves, taking full account of the specific linguistic and formal richness of the texts in their original language. The book is aimed at readers with a good working knowledge of contemporary Italian.

Offers a selection of Italian poems, with notes and commentary in English, and critical essays on individual authors and trends. This volume covers the period from the early years of the twentieth century up to the 1970s, and focuses on the work of poets such as Ungaretti and Saba. It is intended for those with a good working knowledge of Italian.

Eanna O Ceallachain is Senior Lecturer and Head of Italian at theUniversity of Glasgow. He has written extensively on the poetry of Eugenio Montale,and has also published articles on other aspects of modern Italian poetry, including thework of Sanguineti.