Items related to Robert Vaughn: A Fortunate Life: An Autobiography 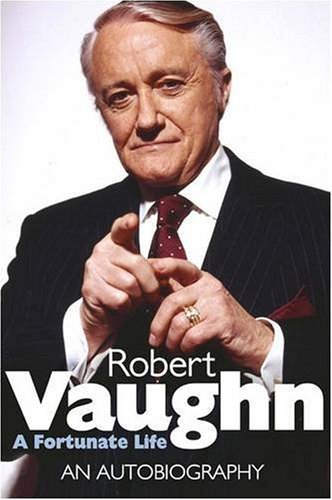 "Robert Vaughn is a gifted storyteller. He writes breathtakingly well, capturing English prose-poetry with all the joy of an eminent Casanova. Here in this "Fortunate Life" you will find elegant bawdiness, ribald tales, plus a rowdy, outrageous recounting of the doings of the famous and the infamous in the worlds of theater, politics, and business. You will read about hair-raising escapes from the Soviet invasion and from an extortionate situation in South America. Vaughn is modest on his success and hilarious on the subject of his failures. There is an astonishing revelation on the subject of Robert Kennedy's assassination. "A Fortunate Life "is no mere 'then I...' book stuffed with fluff. It has life, love, laughter, tragedy, but above it all hilarity and is indeed inspiring." ---Malachy McCourt, author of "A Monk Swimming"

At the height of his television fame on "The Man From UNCLE", Robert Vaughn was one of Hollywood's most eligible bachelors, with countless adoring female fans. His affairs with famous celebrities, including Natalie Wood, made front-page news. But Vaughn is not just a handsome face - he is a talented stage, television and film actor.In this fascinating biography Vaughn recounts his memories of a golden era in Hollywood and the trials and tribulations of life as a successful actor, from hot dates, having an FBI file because of his anti-Vietnam stance, being caught up in the Russian invasion of Prague in 1968 while filming, to being attacked in a restaurant by drunk basketball fans.Vaughn befriended such luminaries as Bobby Kennedy and stars such as Jack Nicholson, met presidents at parties and had many adventures with celebrities past and present, from Elvis and Judy Garland to Steve McQueen and Elizabeth Taylor. This is his revealing and captivating story.Once, one of the most famous bachelors in Hollywood, the star of films such as "The Magnificent Seven" and TV series including "The Man From UNCLE" finally tells his Hollywood secrets.

This book includes his adventures with fellow stars, from Elvis and Judy Garland to Steve McQueen and Elizabeth Taylor.