Items related to Deep Play: Climbing the World's Most Dangerous... 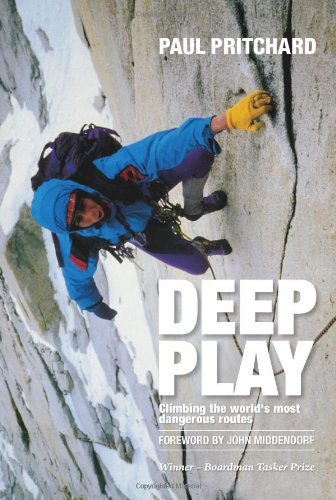 Winner of the 1997 Boardman Tasker Prize for Mountain Literature, Paul Pritchard's Deep Play is a unique, stylish and timeless commentary reflecting the pressures and rewards of climbing some of the world's hardest and most challenging rock climbs. Pritchard started climbing in Lancashire before moving to join the vibrant Llanberis scene of the mid 1980s, at a time when the adventurous development of the Dinorwig slate quarries was in full swing. Many of the new slate routes were notable for their fierce technical difficulty and sparse protection, and Pritchard took a full part in this arcane sub-culture of climbing and at the same time deployed his skills on the Anglesey sea cliffs to produce a clutch of equally demanding wall climbs. Born with an adventurous soul, it was not long before Pritchard and his friends were planning exotic trips. In 1987, paired with Johnny Dawes, Pritchard made an epoch-making visit to Scotland's Sron Ulladale to free its famous aid route, The Scoop. Pritchard and Dawes, with no previous high altitude experience, then attempted the Catalan Pillar of Bhagirathi III in the Garwhal Himalaya in India, a precocious first expedition prematurely curtailed when Pritchard was hit by stonefall at the foot of the face. In 1992, Pritchard and Noel Craine teamed up with the alpinists Sean Smith and Simon Yates to climb a big wall route on the East Face of the Central Tower of Paine, Patagonia. Pritchard followed this with an equally fine first ascent of the West Face of Mt Asgard on Baffin Island. Other trips - to Yosemite, Pakistan and Nepal as well as returns to Patagonia - resulted in a clutch of notable repeats, first ascents and some failures. The failure list also included two life threatening falls (one on Gogarth, the other on Creag Meaghaidh), which prompted the author into thought-provoking personal re-assessments, in advance of his later near-terminal accident on The Totem Pole in Tasmania. A penetrating view of the adventures and preoccupations of a contemporary player, Deep Play stands alone as a unique first-hand account of what many consider to be the last great era in British climbing.

"It is a remarkable book. It is a love letter to the mountain, an obituary for lost friends, a Joycean study of a community. Most of all, in its roughshod description of thrills and achievement, adventure and comradeship ... it's an explanation of a way of life." (Sabine Durrant, The Guardian.) "Not since The Hard Years has the social background of a leading protagonist been so effectively drawn. Touching on themes of economic deprivation, failing education standards and the brutish myopia that affected Britain, but especially England, in the 1980s, Pritchard illustrates how climbing was, at least then, a rare way to escape from monochrome to glorious Technicolor." (Ed Douglas, Climber Magazine.) "It is bold, experimental, innovative in its narrative and descriptive material in a way which is entirely in keeping with the spirit of the prize." (Peter Gillman, Boardman Tasker Prize Chair of Judges.) --various

Paul Pritchard is a multi award-winning author and one of the UK's most visionary and accomplished climbers. Originally from Lancashire, he began climbing in his teens and went on to repeat some of the most difficult routes in the country, before moving to Llanberis in North Wales where he played a pivotal role in the development of the Dinorwig slate quarries and the imposing Gogarth cliffs on Anglesey. A move into mountaineering followed, with significant ascents around the world, including the East Face of the Central Tower of Paine in Patagonia, and the first ascent of the West Face of Mt Asgard on Baffin Island. In 1998 his life changed dramatically when he was hit by falling rock while climbing the Totem Pole, a sea stack off the Tasmanian coast. He was left with Hemiplegia - paralysis down the right side of his body - and also lost the power of speech for many months. Since his accident Paul has continued to lead a challenging life through caving, tricycle racing, sea kayaking, river rafting, climbing Kilimanjaro, and, in 2009, a return to lead rock climbing. He has devoted a considerable amount of time to raising awareness for the charity Headway and the Upendo Leprosy Centre in Tanzania, and he is a patron of Hemihelp and the Llanberis Mountain Film Festival. He is the author of three books - Deep Play, Totem Pole, and The Longest Climb - and has won the prestigious Boardman Tasker Prize for Mountain Literature outright on two occasions (Deep Play, 1997; Totem Pole, 1999). Totem Pole was also awarded the Grand Prize at the 1999 Banff Mountain Book Festival. Paul lives in Hobart, Tasmania.

Book Description Vertebrate Publishing. Paperback / softback. Condition: New. New copy - Usually dispatched within 3 working days. Winner of the 1997 Boardman Tasker Prize for Mountain Literature, Paul Pritchard's Deep Play is a unique, stylish and timeless commentary reflecting the pressures and rewards of climbing some of the world's hardest and most challenging rock climbs. It is a unique first-hand account of what many consider to be the last great era in British climbing. Seller Inventory # B9781906148584