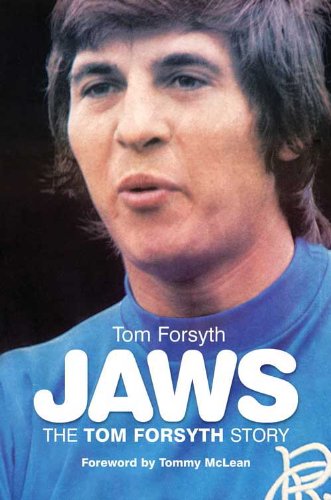 Tom Forsyth is a Scottish football legend. Raised in Stonehouse, Lanarkshire he was a leading player with Stonehouse Violet, Motherwell, Rangers and of course Scotland. Forced to retire at the age of 33 due to a serious knee injury he moved into coaching and management and enjoyed considerable success in these roles. Despite his many triumphs he is a genuinely modest man who is very popular with fans and those in the game. In this fascinating book Forsyth traces his career back to schools football, vividly describing how he graduated to the amateur ranks and then to the Juniors with his local team, Stonehouse Violet. In 1967 he was signed for Motherwell by manager Bobby Howitt and helped the Lanarkshire club win promotion back to the top tier of Scottish football. Forsyth was also an integral part of the great Motherwell team that knocked English giants Stoke City and Tottenham Hotspur out of the Texaco Cup in the same season. In 1972 Forsyth was bought by legendary Rangers manager Jock Wallace and went on to win nine major trophies with the Ibrox club including two trebles, in 1976 and 1978. Quite amazingly his first goal in light blue was also the winner in the Old Firm Scottish Cup final of 1973 and arguably the most famous ever scored in that august competition. That goal and his commitment to the jersey made him a hero to Rangers fans all over the world. It is little wonder that Forsyth has been inducted into the Ibrox hall of fame. Tom Forsyth is also a very proud Scot and was honoured to be capped on twenty-two occasions by his country, including once as captain. He was part of the great Scotland team of the mid-to-late 1970s, a team that won back-to-back home-international championships and knocked the European champions out in the qualifying rounds of the 1978 World Cup. There was also to be considerable success in football management as assistant to old pal and former Rangers teammate Tommy McLean. As well as winning the 1991 Scottish Cup final with Motherwell, McLean and Forsyth guided the club to third place in the premier league, a considerable achievement for a provincial club. The book is also full of anecdotes about the great players and managers Forsyth encountered during his long career in the game. Nor does he shy away from contoversial issues: the headline-making spat with former Scotland manager Tommy Docherty; the fall-out with John Greig; the way he was wrongly labelled as just a hard man; the unfair treatment from referees; the debacle that was Argentina 1978; the current state of Scottish football. A book that will delight anyone with an interest in the game in Scotland.