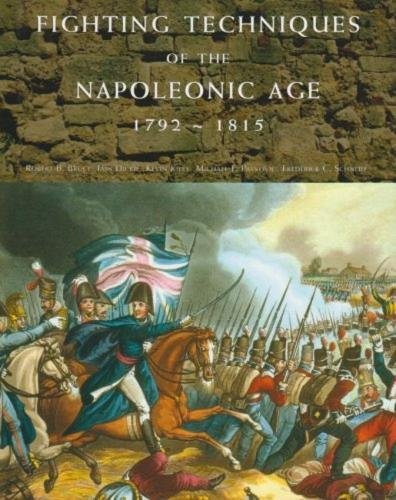 The book is divided into five chapters, covering the main elements of Revolutionary and Napoleonic warfare: infantry, cavalry, generalship, artillery and siege warfare and naval combat. Each chapter features four battles to demonstrate the strengths, pitfalls and characteristics of the style of warfare. Napoleonic techniques are notorious for being highly fluid and flexible, combining new and ancient techniques to seal the fate of “La Grande Armee” as the one of the most charismatic and fierce armies ever known. In the first chapter, the book considers the crucial role of infantry by examining the battles of Rivoli (1797), Maida (1806), Auerstadt (1806) and Waterloo (1815). The uses and merits of light infantry, elite infantry formations (such as the Imperial Guard), line versus column, and the use of defensive squares, are explored. The second chapter examines the importance of cavalry as both reconnaissance and shock troops, with accounts of famous actions by elite cavalry at Somosierra (1808) and Borodino (1812) turning the tide of the battle. Using examples such as Austerlitz (1805) and Wagram (1809), the third chapter discusses the command structures and tactics of the era and investigates how the great generals were able to combine cavalry, infantry and artillery effectively on the battlefield. The fourth chapter looks at the employment of massed artillery as a key component on the battlefield– for example, at Friedland (1807) – the revolutionary use of horse artillery and the siege tactics employed at great sieges such as Badajoz (1812) and Hamburg (1813). The final chapter explores the role of naval warfare, examining key encounters at the Nile (1798), Trafalgar (1805) and Lake Erie (1813). Using specially commissioned colour and black-and-white artworks to illustrate the battles, equipment and tactics of the era, Fighting Techniques of the Napoleonic Age explores the methods by which the great commanders of the era– such as Napoleon, Wellington and Nelson – won battles and campaigns, and why others were less successful. The book is an essential companion for anyone interested in warfare in the Napoleonic era.

An extremely useful general resource... Recommended as a solid foundation to Napoleonic warfare and a treat to the eyes. Source: Wargames

Dr. Robert B. Bruce is a military historian specialising in the French, German, and American armies. He is the author of A Fraternity of Arms: America & France in the Great War which won the 2004 Tomlinson Prize from the Western Front Association for the best book on World War I.

Iain Dickie became the Chairman of the Battlefields Trust in 2004, he is editor of Miniature Wargames. His interests in military history and battlefields are wide-ranging, with specialisation in ancient warfare and as a re-enactor in a Napoleonic French line infantry regiment. Kevin Kiley is a life-long student of the Napoleonic period, served for many years as an artillery officer and is currently a teacher in the USA. Michael F. Pavkovic is an associate professor in the Strategy and Policy Department of the U.S. Naval War College. Previously, Dr. Pavkovic was the associate dean for the College of Liberal Arts and a program chair for the diplomacy and military studies programs at Hawaii Pacific University. Frederick C. Schneid is Professor of History at High Point University. He is the author of Napoleon's Italian Campaigns, 1805-1815 and Soldiers of Napoleon's Kingdom of Italy: Army, State and Society, 1800-1815. He serves on the board of directors of the Consortium on Revolutionary Europe and is southern regional director for the Society for Military History.

Book Description Hardcover. Condition: Good. Connecting readers with great books since 1972. Used books may not include companion materials, some shelf wear, may contain highlighting/notes, may not include cdrom or access codes. Customer service is our top priority!. Seller Inventory # S_239678478

Book Description Hardcover. Condition: Good. Connecting readers with great books since 1972. Used books may not include companion materials, some shelf wear, may contain highlighting/notes, may not include cdrom or access codes. Customer service is our top priority!. Seller Inventory # S_317290101

Book Description Hardcover. Condition: Good. Connecting readers with great books since 1972. Used books may not include companion materials, some shelf wear, may contain highlighting/notes, may not include cdrom or access codes. Customer service is our top priority!. Seller Inventory # S_333187434