Items related to The Complete Nemesis the Warlock: Volume Two: 2 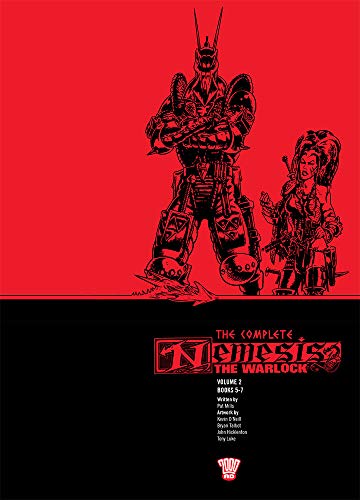 Continuing the collection of classic Nemesis stories. Written by 2000AD creator Pat Mills, this volume includes art by Bryan Talbot and Kevin O'Neill, plus cover gallery and intro by Bryan Talbot. One of the all-time great 2000 AD stories.

Pat Mills is the creator and first editor of 2000 AD. For the Galaxy's Greatest Comic, he is the writer and co-creator of ABC Warriors, Finn, Flesh, Nemesis the Warlock, Slaine, M.A.C.H 1, Harlem Heroes and Savage. He also developed Judge Dredd and wrote one of the early Dredd serials -- 'The Cursed Earth'. He wrote Third World War for Crisis!, a politically-charged spin-off from 2000 AD, and Black Siddha for the Judge Dredd Megazine. Outside 2000 AD he is the writer and co-creator of the long-running classic anti-war story Charley's War, as well as Marshal Law. He has also written for the Batman, Star Wars and Zombie World series for the US market. Currently Mills is writing the best-selling series Requiem -- Vampire Knight for Editions Nickel of France with artist Olivier Ledroit, and a spin-off series, Claudia -- Vampire Knight, with artist Frank Tacito. Two further French series are in production. Kevin O'Neill is a 2000 AD legend. From working as an art assistant on the very first prog, he quickly became involved in the creative side of the comic, co-creating classics like A.B.C. Warriors, Bonjo From Beyond The Stars, Metalzoic and Nemesis the Warlock. O'Neill has also written for the comic on strips including Dash Decent, Future Shocks, One-Offs, Tharg the Mighty, and has illustrated Future Shocks, Judge Dredd, M.A.C.H. 0, One-Offs, Ro-Busters, Ro-Jaws' Robo- Tales, Tharg the Mighty and Torquemada. Outside the Galaxy's Greatest Comic, O'Neill was briefly notorious as the only artist ever to have his work rejected wholesale by the Comics Code Authority! Happily, his notoriety quickly became fame and acclaim, as his work on strips like Marshal Law and most recently The League of Extraordinary Gentlemen have raised him to a very high profile. O'Neill's other work includes Green Lantern and Batman. Bryan Talbot is one of the UK's most respected comics artists. He has contributed to Future Shocks, Judge Dredd, Nemesis the Warlock, Ro-Busters and Slaine in the Galaxy's Greatest Comic, and most recently wrote and illustrated a silent One-Off. Beyond 2000 AD, Talbot is renowned for his body of graphic novel work, which includes The Adventures of Luther Arkwright, Heart of Empire, The Tale of One Bad Rat and Alice in Sunderland. John Hicklenton has illustrated a wide range of strips across both 2000 AD and the Megazine, including Heavy Metal Dredd, Judge Dredd, Mean Machine, Nemesis the Warlock, Pandora, Rogue Trooper, Strange Cases and Tharg's Future Shocks. His work can also be seen in Crisis! and Deadline. Most recently he has provided the art for Blood of Satanus III in Judge Dredd Megazine and worked with Pat Mills on Zombie World. Tony Luke has written for Judge Dredd, Judge Anderson and Middenface McNulty as well as provided the photography for several Nemesis The Warlock photo stories. P.

Meet Nemesis the Warlock, champion of the coming rebellion as he battles against the wicked forces of Torquemada. Joining him is Thoth, spawn of Nemesis himself, just as blood-thirsty as his dad! Also along for this wild ride are the ABC Warriors, joining the Warlock on his weird and wonderful adventures. This is classic "2000 AD", brought to you by some of the greatest names in comics!

Book Description Rebellion, United Kingdom, 2007. Paperback. Condition: New. Bryan Talbot, Tony Luke, John Hicklenton, (illustrator). Language: English. Brand new Book. In his continuing battle against the wicked forces of Termight's mad tyrant Torquemada, alien freedom fighter Nemesis The Warlock is joined by his bloodthirsty son Thoth and war robots the ABC Warriors for a nightmarish adventure across the terrifying Time om the unique imagination of Pat Mills (Savage) this second volume in the series comes complete with an introduction by the author, an afterword by Bryan Talbot and over 40 pages of extra material!. Seller Inventory # AA89781905437368

2. The Complete Nemesis the Warlock

4. The Complete Nemesis the Warlock

5. The Complete Nemesis the Warlock

8. The Complete Nemesis the Warlock: Bk. 2

Book Description Rebellion. Paperback. Condition: New. New copy - Usually dispatched within 4 working days. Meet Nemesis the Warlock, champion of the coming rebellion as he battles against the wicked forces of Torquemada. Joining him is Thoth, spawn of Nemesis himself, just as blood-thirsty as his dad. Also along for this wild ride are the ABC Warriors, joining the Warlock on his weird and wonderful adventures. Seller Inventory # B9781905437368

9. The Complete Nemesis the Warlock

Book Description Rebellion. Condition: New. Meet Nemesis the Warlock, champion of the coming rebellion as he battles against the wicked forces of Torquemada. Joining him is Thoth, spawn of Nemesis himself, just as blood-thirsty as his dad. Also along for this wild ride are the ABC Warriors, joining the Warlock on his weird and wonderful adventures. Illustrator(s): Talbot, Bryan; Luke, Tony; Hicklenton, John; Roach, David. Num Pages: 288 pages, black & white illustrations. BIC Classification: FXS. Category: (G) General (US: Trade). Dimension: 258 x 189 x 25. Weight in Grams: 632. . 2007. 1St Edition. Paperback. . . . . Books ship from the US and Ireland. Seller Inventory # V9781905437368

10. The Complete Nemesis the Warlock