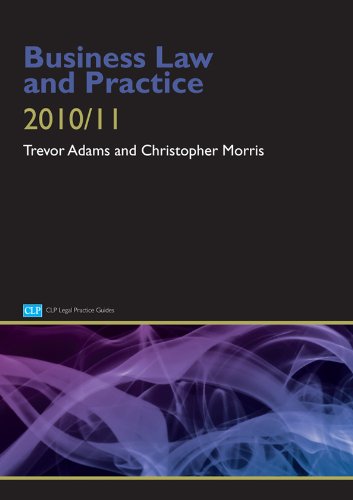 Business Law and Practice provides a detailed guide to the forms of business organisation most commonly encountered in practice, examining their internal concerns, their relationships with outsiders and a broad overview of their possible tax liabilities. As such, the book provides a comprehensive and practical introduction to advising businesses, whatever their structure. This edition has been revised to take account of all the changes brought in by the Companies Act 2006 and reflects the law in force as at March 2010. An implementation timetable is included, as is a table indicating the destinations of the commonly used sections of the 1985 Act. Many new cases have also been added to this new edition including: Sharafi v Woven Rugs Ltd (in administration) [2010] EWHC 230 (Ch) and Boughtwood v Oak Investment Partners XII Ltd (2010) on unfairly prejudicial conduct; Kiani v Cooper (2010) on derivative claims; Attwood Holdings v Woodward (2009) on claims against a director; R v McQuoid (2009) on insider dealer sentencing; Lovett v Carson Country Homes Ltd (2009) on directors’ authority; ED Games Ltd v Cipolletta (2009) and Bangla Television Ltd (in liquidation) v Bangla TV Ltd (2009) on liquidators’ claims against directors; Kotonou v Secretary of State for Business, Enterprise and Regulatory Reform (2010) and R v Seager; R v Blatch (2009) on directors’ disqualification. On partnership: Rowlands v Hodson (2009) on partners’ liability. On insolvency: In the matter of Kayley Vending Ltd (2009) and In the matter of Hellas Telecommunications (Luxembourg) II SCA (2009) on ‘pre-pack’ administration and possible review of such arrangements; R (on the application of BERR) v Baden Lowe (2009) on fraudulent behaviour in a liquidation; In the matter of Bluebrook Ltd (2009) and In the matter of Holdco 4 Ltd (2009) on schemes of arrangement.

Dr Trevor Adams practises as a consultant and was a Senior Lecturer at The College of Law.

Book Description College of Law Publishing, 2010. Condition: Good. This book has soft covers. Ex-library, With usual stamps and markings, In good all round condition. Please note the Image in this listing is a stock photo and may not match the covers of the actual item,1350grams, ISBN:9781905391967. Seller Inventory # 3803240

Book Description The College of Law, United Kingdom, Guildford, 2010. Paperback. Condition: Very Good. The book has been read, but is in excellent condition. Pages are intact and not marred by notes or highlighting. The spine remains undamaged. Seller Inventory # GOR003256295