Items related to The Building of the Green Valley: A Reconstruction...

Peachey, Stuart The Building of the Green Valley: A Reconstruction of an Early 17th-century Rural Landscape

The Building of the Green Valley: A Reconstruction of an Early 17th-century Rural Landscape 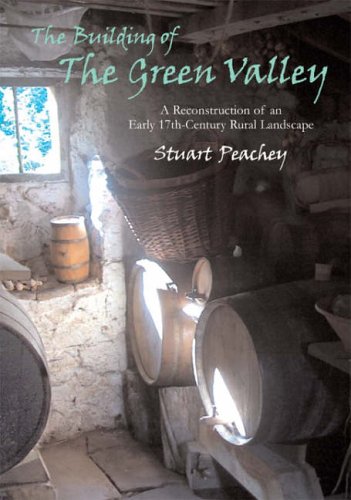 This book presents the story of the construction of the 17th century historical landscape used in the BBC2 television series 'Tales from the Green Valley'. On one level it is the tale of a bizarre social project carried out by some 400 muscular historians, re-enactors, international volunteers, cavers and mountain climbers. On another it provides a detailed account of the development of a valuable experimental history project with wide educational and research applications, on a minimal budget. It catalogues a unique restoration of a derelict historic farming landscape, from buildings and field boundaries to woodlands and weed patterns, and describes its current management, on a social farming basis, with livestock co-operatives and adopted orchards.

In 1987 at a secret location on the Welsh borders a team of muscular historians set out on a project to reconstruct an entire historical landscape to its condition in the late 16th and early 17th centuries. This still secret site came to national awareness with its use as the location for the 12 part BBC 2 series "Tales from the Green Valley" a year on a farm in 1620 broadcast in the autumn of 2005. This book catalogues the origins of the project and how it has succeeded with a minimal budget despite natural and human impediments over the last 18 years. The book also explains how, around the core objective of creating the ultimate Living History site for occasional educational displays, has developed a project that has drawn in 400 volunteers from 27 countries, created self funding social farming structures conserving historic breeds of animals trees and vegetables that could be applied in many countries. The early chapters deal with the origins of the project, its initial membership and the finding of the site. Subsequent chapters deal with the first trial works on the site and then the challenges faced by legal and bureaucratic obstacles and resistance, particular the planning system and how these were overcome. Two parallel sections then provide time lines which cover the development of the landscape and the principal buildings from 1992 to 2002. The landscape includes the re-establishment of orchards and gardens, the recovery of bluebell rich western hay meadows and the restoration and replacement of hedges, walls and gates. The main buildings covers excavation and planning, the sourcing of materials and the rebuilding of walls, and roofs. Further chapters detail how the site and reconstruction was researched from both site specific and general period agricultural data. It provides a chronology of the work undertaken and the sourcing of rare and specialist historical materials. It further shows the development of the educational, conservation and social agricultural activities on the site. Once the main building works had been completed the text describes the design and selling of the film project, the preparatory sourcing of period style agricultural artefacts and the additional outbuildings constructed to complete a working farm during 2003. The second part of the book is topic rather than chronologically based and covers researching the site itself and the material objects way of life of the farming communities between 1580 and 1660. Other chapters deal specifically with researching and restoring the gardens and orchards and with the natural history of the valley. A final section deals with the people involved with the project, the organisations from which they came and how the ethos of these organisations could lead to the sustaining of a long term project through a clutch of bodies designed to be functional disorganisations.

Stuart Peachey graduated from Reading in 1977 with a BA Hons, in Human Geography doing his postgraduate teaching qualification at St Paul's College Cheltenham 1978-79. His other qualifications vary from mountain leadership to food hygiene. Interested in military history from an early age, after arriving at Reading he was recruited to a new English Civil War Unit based at the University. When asked in 1983 to run a living history in Gosport he found there was no suitable venue and suggested that they built one from scratch. Recruiting a team of 35 volunteers who worked 15 hours a day for up to 15 days they constructed a hamlet which the council decided to retain. The funds accidentally raised by this project were used to buy the Green Valley site where over nearly 20 years over 500 volunteers from 28 countries have toiled to restore and maintain an early 17th century agricultural landscape. Stuart carried out the majority of the supporting historical research and the organization of the site development in parallel with careers in lecturing, commercial banking and the Yorkshire Dales National Park. He has written or co written over 110 small specialist publications on period food, agriculture, living history topics and the English Civil War and contributed to a substantial number of radio and TV programmes and magazines on historical matters. In 1987 he co founded Historical Management Associates Ltd which has developed a publishing arm, runs period feasts and carries out consultancy work among other activities. In his spare time he is an active mountain walker and caver and father of three boys.

1. THE BUILDING OF THE GREEN VALLEY : A RECONSTRUCTION OF AN EARLY SEVENTEENTH-CENTURY RURAL LANDSCAPE

2. The Building of the Green Valley: A Reconstruction of an Early 17th-Century Rural Landscape