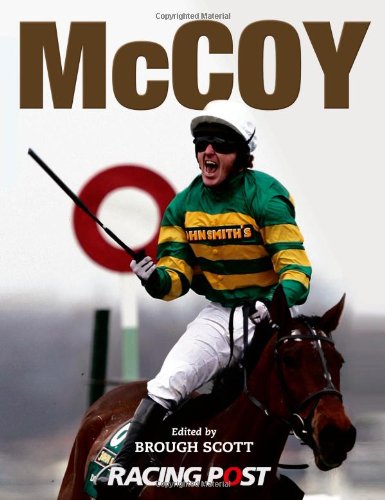 McCoy celebrates the country's most successful jump jockey, Tony 'AP' McCoy, in the year in which he won the world's most famous horse race, the Grand National, and BBC Sports Personality of the Year 2010. McCoy is a wonderful record of the champion jump jockey's career in both words and images, chronicling his rise with trainer Jim Bolger and his first winner in 1992, his move to England in 1994 with Toby Balding, joining Martin Pipe in 1995 and his various big-race winners on the likes of Pridwell, Edredon Bleu, Best Mate, Brave Inca, Binocular and of course Don't Push It. Racing Journalist of the Year Brough Scott, editor of the book, says: 'The Racing Post has been lucky enough to fully chronicle in both words and pictures AP's phenomenal achievements of the last 15 years. This book gathers together the best of this material to give a unique picture of the finest sportsman currently operating in any discipline anywhere.' Linked pieces by Scott joins the historical articles together and sets them in context, coupled with the Post's unique library of images.

BROUGH SCOTT, a former jumps jockey, has covered racing many years, broadcasting for ITV and Channel 4, as co-founder of the Racing Post and as a journalist working for the Sunday Telegraph. He has written numerous books, including Galloper Jack and Of Horses and Heroes.