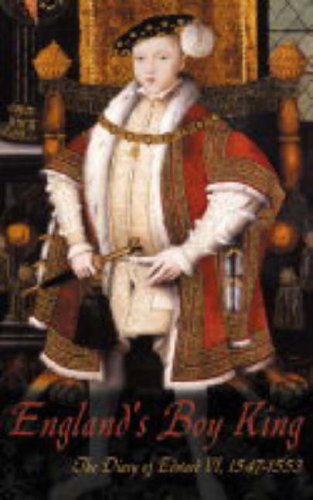 In January 1547 a nine-year-old boy was proclaimed king of England. The young monarch, Edward VI, was the son of Henry VIII and all the power which that ruler had eagerly amassed found itself in the youthful hands of a frail and sickly child. That child, England's boy king, would last just six years on the throne before dying of tuberculosis and taking the hopes of many with him to the grave. Throughout Edward's short reign the young ruler kept a journal, a detailed diary recounting events in his kingdom. It is a fascinating record of Tudor England through the eyes of its monarch. The diary narrates all the momentous events in the young king's life but also observes the wider world, noting down news from England and keeping a watchful eye on Ireland, Scotland and mainland Europe. Edward reveals an increasing awareness as his reign progresses, showing an interest in religious reform, commerce and political machinations. He gleefully recounts the fate of traitors and rebels and ponders on the ups and downs of Scottish politics.

But he also notes down items which have a personal interest for him - an earthquake in Croydon in May 1551, presents from France, jousting on boats on the Thames. Sometimes naive, sometimes astute and calculating, the diary is a faithful record of six years in English history. An age in which political and religious parties rushed to secure their influence over the last of the Tudor kings whilst still darker forces wait in the wings, with religious revolution and rebellion never far away. Edward's diary is complete with explanatory and biographical notes and a detailed chronology, and is a fascinating record of astonishing times. It makes a delightful historical treasure and provides a wonderful insight into the life of an unfortunate Tudor.

Buy Used
Condition: Near Fine
The pages are bright, unmarked... Learn more about this copy

Book Description Ravenhall Books, 2005. Hardcover. Condition: Near Fine. Dust Jacket Condition: Near Fine. The pages are bright, unmarked and tightly bound. No bumping on the boards which are therefore still square at all corners. Just trivial touches of shelf wear on the jacket which has no chips or tears. Mailed the same or next working day in a cardboard book box. Seller Inventory # 438.02