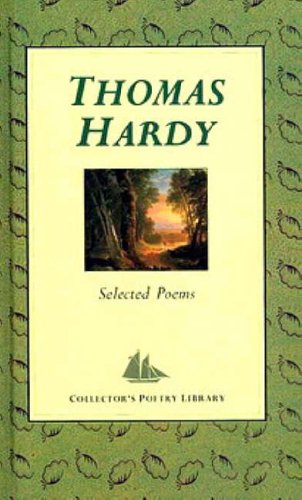 Hardy's poetry explores a rugged fatalist outlook against the dark landscape of his native Dorset. A traditionalist in technique, he nevertheless forged a highly original style, combining rough-hewn rythms and colloquial diction with an extraordinary variety of meters and forms.

In Thomas Hardy: Selected Poems Tim Armstrong brings together over 180 poems in the first comprehensively annotated selection of Hardy’s poetry. Unlike most previous selections, this edition preserves the shape of the poet’s career by presenting the poems in the order in which they appeared in the Collected Poems of 1930, rather than re-ordering them thematically.

Head notes to each poem give the reader information about its composition, publication, sources and metrical scheme; on-the-page notes list significant variants in Hardy’s manuscripts, point out literary and other allusions, and give explanatory glosses. An appendix contains a selection of relevant passages from Hardy’s notebooks, letters, and autobiography; and a bibliography suggests further reading.

Tim Armstrong’s critical Introduction discusses Hardy’s career, his poetics, his use of memory and allusion and examines his position in the context of Victorian debates on aesthetics and belief. The generous selection of poems includes many lesser-known poems as well as those which have received most critical commentary, and the important elegiac sequence ‘Poems of 1912-13’ is included in its entirety.

Thomas Hardy was born on 2 June 1840. He wrote novels and poetry, much of which is set in the semi-imaginary county of Wessex. His novels include Far From the Madding Crowd (1874), The Return of the Native (1878), The Mayor of Casterbridge (1886), Tess of the D'Urbervilles(1891) and Jude the Obscure (1895). He published his first volume of poetry, Wessex Poems, in 1898 and continued to publish collections of poems until his death on 11 January 1928.

Book Description Collector's Library, 2004. Hardcover. Condition: Used; Good. **Simply Brit** Shipped with Premium postal service within 24 hours from the UK with impressive delivery time. We have dispatched from our book depository; items of good condition to over ten million satisfied customers worldwide. We are committed to providing you with reliable and efficient service at all times. Seller Inventory # mon0001721517

Book Description CRW Publishing Limited. Hardcover. Condition: Used; Good. **SHIPPED FROM UK** We believe you will be completely satisfied with our quick and reliable service. All orders are dispatched as swiftly as possible! Buy with confidence! Aloysius Ihezie. Seller Inventory # mon0001522066

Book Description Paperback. Condition: Very Good. The book has been read, but is in excellent condition. Pages are intact and not marred by notes or highlighting. The spine remains undamaged. Seller Inventory # GOR001248393