Items related to The Cosgrave Party: a history of Cumann na nGaedheal,...

The Cosgrave Party: a history of Cumann na nGaedheal, 1923-33 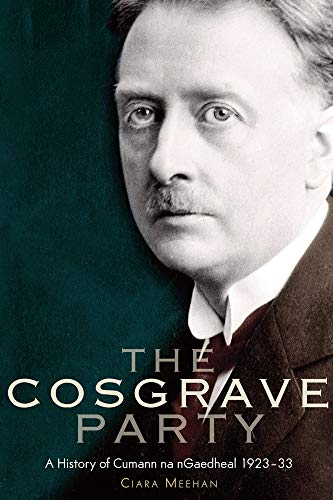 Most political parties are created to win power, but Cumann na nGaedheal was built by men already running the country. `The Cosgrave Party' tells the story of a political party neglected by historians, one which was born into government amidst the bloodshed of the Civil War of 1922/23. The first monograph to focus on Cumann na nGaedheal, it investigates the party's internal politics as it struggled with ideological tensions and personality clashes. It covers Cumann na nGaedheal's decade in power from 1923 to 1933, a period that saw more frequent and serious cabinet crises than any other. W.T. Cosgrave's leadership skills are discovered anew, as Ciara Meehan reveals his electoral prowess in 1927 and his handling of the Army Mutiny of 1924 from his sick bed. With deft recalibrating of this long neglected material, Meehan shows how Cosgrave led a government and built a state despite threats from those outside and within the political system. This illustrated account ultimately shows how Cumann na Gaedheal consolidated the tradition of constitutional nationalism in Ireland as its name - Party of the Gaels - promised it would.

Ciara Meehan holds a BA and PhD from University College Dublin. She was appointed lecturer in history at University of Hertfordshire in 2013. Previously she lectured at the School of History and Archives and the Quinn School of Business, University College Dublin. Her research focuses on the evolution of the Irish state and the development of the party system, with a special interest in the history of Fine Gael. She is also the author of several articles on Irish politics post-independence.

Buy Used
Condition: Near Fine
A clean, bright, tight copy that... Learn more about this copy

Book Description Prism, 2010. Hardcover. Condition: Near Fine. Dust Jacket Condition: Very Good. A clean, bright, tight copy that appears to be unread. A tiny scratch to top of back board but no other defects. Dj is unclipped with light shelf-wear and a few minor scratches. Seller Inventory # 15850