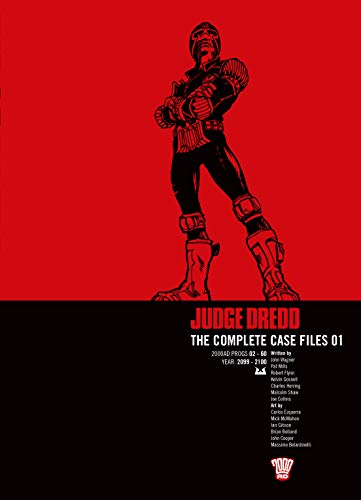 The story of future lawman Judge Dredd continues in this third book collecting together his adventures in chronological order. This bumper volume features many of Dredd's most exciting cases including the first appearance of Judge Death and Psi Judge Anderson and the return of Satanus first featured in the epic Cursed Earth saga.Featuring the writing talents of comic legends Pat Mills (Slaine) and John Wagner (A History of Violence), this volume also features the art of Ian Gibson (The Ballad of Halo Jones), Dave Gibbons (Watchmen) and Brian Bolland (Batman: The Killing Joke) amongst many other artists.

Pat Mills is the creator and first editor of 2000 AD. For the Galaxy's Greatest Comic, he is the writer and co-creator of ABC Warriors, Finn, Flesh, Nemesis the Warlock, Slaine, M.A.C.H 1, Harlem Heroes and Savage. Outside 2000 AD he is the writer and co-creator of the long-running classic anti-war story Charley's War, as well as Marshal Law. He has also written for the Batman, Star Wars and Zombie World series for the US market. Currently Mills is writing the best-selling series Requiem -- Vampire Knight for Editions Nickel of France with artist Olivier Ledroit, and a spin-off series, Claudia -- Vampire Knight, with artist Frank Tacito. Two further French series are in production. John Wagner is, to many fans, the very heart of 2000 AD. Involved from the earliest days of the Galaxy's Greatest Comic, he co-created Judge Dredd, as well as a whole cast of other memorable characters. His Paradox Press graphic novel A History of Violence was made into a major film by director David Cronenberg, and Judge Dredd adapted into a film twice, most recently in DREDD by Alex Garland and Pete Travis.Perhaps the most popular 2000 AD artist of all time, Brian Bolland's clean-line style and meticulous attention to detail ensure that his artwork on strips including Dan Dare, Future Shocks, Judge Dredd and Walter the Wobot looks as fresh today as it did when first published. Co-creator of both Judge Anderson and The Kleggs, Bolland's highly detailed style unfortunately precluded him from doing many sequential strips -- although he found the time to pencil both Camelot 3000 and Batman: The Killing Joke for DC Comics. Although Mike McMahon may not have illustrated as many strips as other 2000 AD creators, his importance to the comic cannot be overstated. It was McMahon who co-created perennial classics A.B.C. Warriors and The V.C.'s, and it was also McMahon who gave Judge Dredd his classic, defining, "big boots" look. McMahon has also illustrated One-Offs, Ro- Busters, and provided a classic run on Slaine. Outside of the Galaxy's Greatest Comic, he has pencilled Batman: Legends of the Dark Knight and The Last American, which he co-created with John Wagner.

Contains all of future lawman Judge Dredd's adventures in chronological order - complete and uncut from Prog 2 -60!