Items related to Steam in Ulster in the 1960's (Irish Railway Photographe... 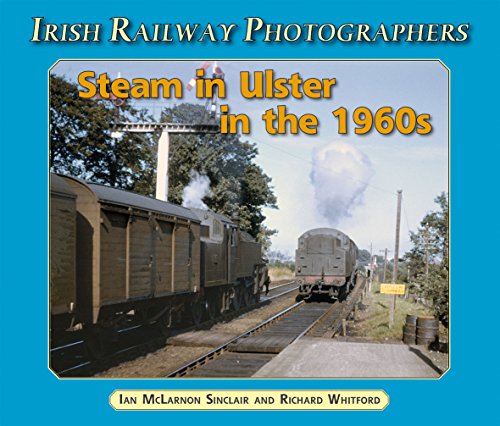 Introduction - If we could turn the clock back and revisit Ulster's railways in the 1960s, we would see a very different scene compared with that of today. The railways were then operated by the Ulster Transport Authority on infrastructure which largely dated back to the Victorian and Edwardian eras. Despite the widespread introduction of diesel railcars in the 1950s, steam still had an important, although decreasing, role to play. The Ulster Transport Authority was created on 1 October 1948, taking over responsibility for the Belfast and County Down Railway and the already state-owned Northern Ireland Road Transport Board. After a brief sojourn with the British Transport Commission, the former lines of the Northern Counties Committee of the London Midland and Scottish Railway became part of the UTA on 1 April 1949. The cross-border railway companies, most notably the Great Northern Railway of Ireland, remained independent. However, financial crisis soon led to the two Governments in Ireland jointly taking over the GNR(I) and running it through the Great Northern Railway Board, with effect from 1953.The 1950s saw an unprecedented programme of railway closures on both the UTA and GNRB systems. In 1958, the GNRB was dissolved and its remaining lines in Northern Ireland transferred to the UTA. Then followed a brief period of stability until publication of the Benson report in 1963. It recommended more severe cuts in the railway network including both lines to Londonderry. In the event the closures were not quite as severe as they might have been and the former NCC line to Derry survived. The decade ended with rail services being taken over by a new Governmentowned company, Northern Ireland Railways, in 1968. It was against this background that a small group of railway enthusiasts-cum-photographers set out to record as much as they could of Ulster's railway network before there were any more closures and before steam locomotives finally disappeared from the scene. One such photographer was Richard Whitford. Richard was brought up in Ballyclare where the family home backed onto the broad gauge branch off the NCC main line.By standing on the dining room table he could see trains on the narrow gauge line which still operated between the paper mills outside Ballyclare and Larne Harbour! Richard began his railway photography at Woodenbridge in County Wicklow in 1955 using a box camera. In 1960 he began photographing Northern Ireland's railway network in earnest and soon expanded his interests to include buses, trams and trolleybuses, here and further afield. Travelling to the chosen location usually meant going by train or bus, but a lineside permit issued by the UTA meant that access was possible to areas not open to the general public. Another important factor was knowing which trains would be operated by steam. The working timetables and weekly notices were a useful guide, but a chat with a friendly railwayman often brought more enlightened information about late changes or extra specials. Photography in those days was not a cheap hobby. Great care had to be taken to get the photograph right the first time and to avoid wasting expensive film.Lighting was also a major concern; the films were not very suitable for use in low light, but if Richard had waited for the sun to come out then most would never have been taken! Fortunately Richard did take those photographs and, thanks to his efforts, we can turn the clock back forty or more years and relive those days of UTA steam in the 1960s.

Richard Whitford has been a lifelong transport enthusiast and a photographer for over 50 years. Some of his photographs have featured in many books and periodicals in the past, but this is the first publication to be entirely devoted to his work and largely uses previously unpublished material. Now retired, Richard spent most of his working life with Northern Ireland Railways as a signalman and an inspector. Ian McLarnon Sinclair is a Programme Coordinator with BBC Northern Ireland and has produced a number of radio documentaries on transport matters. He is a former member of North Down Borough Council and in recent years has played an active role campaigning for the retention of railways in Northern Ireland. A lifelong railway enthusiast, Ian previously worked for Northern Ireland Railways in the Signals and Telegraphs department. His book Along UTA Lines was published by Colourpoint in 2002.

Covers the railway in Northern Ireland before the break up of the UTA in the early 60's to the creation of the NIR in 1967.

Book Description Paperback. Condition: Very Good. The book has been read, but is in excellent condition. Pages are intact and not marred by notes or highlighting. The spine remains undamaged. Seller Inventory # GOR007826680

Book Description Paperback. Condition: Good. The book has been read but remains in clean condition. All pages are intact and the cover is intact. Some minor wear to the spine. Seller Inventory # GOR008751990

Book Description Paperback. Condition: Good. Good condition is defined as: a copy that has been read but remains in clean condition. All of the pages are intact and the cover is intact and the spine may show signs of wear. The book may have minor markings which are not specifically mentioned. Most items will be dispatched the same or the next working day. Seller Inventory # wbb0018177320

Steam in Ulster in the 1960's (Uta Photograph Archive)