Items related to To The Blight: Part Two of The Eye of the World (Wheel...

Jordan, Robert To The Blight: Part Two of The Eye of the World (Wheel of Time)

To The Blight: Part Two of The Eye of the World (Wheel of Time) 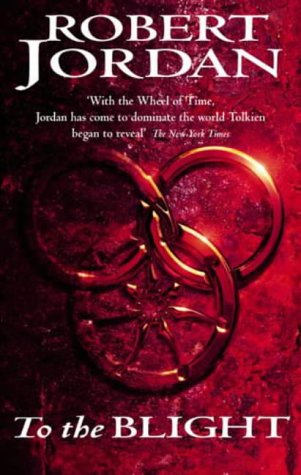 Despite the magical aid of Moraine Sedai and the awesome fighting skills of the warrior Lan, Rand Al'Thor and his friends have been unable to throw off the foes that pursue them. Even a detour through the ghosts of the ruined city of Shadar Logoth has failed to deter the Dark One's minions. Now the companions have a Trolloc army at their rear and eyeless shadowmen, known as Myrddraal, laying ambushes on the roads ahead. Worse still, the Dark One has dispatched his most feared general to ensure that Rand will die. Aginor is the powerful magician whose dark magic first created the Trollocs and he will stop at nothing to fulfil his master's bidding. Unless Rand can unlock the secrets of his extraordinary destiny, Aginor will destroy him and the darkness will triumph forever.

The Eye of the World and its sequels in Robert Jordan's Wheel of Time series show the extent to which one can go with a traditional fantasy framework, with added gusto. Stock elements are abound: a reluctant hero--in fact five humble village folk--plucked from wholesome obscurity to fight dark powers; an eternal evil enemy who can be defeated but not destroyed, until the end of the world, which is fast approaching; a mysterious sisterhood with vast powers and who love to manipulate thrones and kingdoms from the shadows (think of the Bene Gesserit of the Dune series); a ferocious battle-hardened warrior race (echoes of the Fremen of Dune, or the Haruchai of the Thomas Covenant novels). Jordan didn't become a bestselling author merely by mixing up traditional ingredients; a master storyteller, he ingeniously gives unusual twists to these conventional fantasy elements. He also excels in the descriptive and narrative skills needed to create a detailed and coherent imaginary world. The many lands he portrays are vast in scope and contain amazingly varied countries and peoples, while retaining the inner coherence needed to make them satisfying places for a fantasy fan to roam around in. However, Jordan's writing never attains the subtlety or sophistication of, say, George RR Martin and there are some annoying stylistic tics: he seems unable to introduce a female character without commenting on her neckline and thereafter has them forever smoothing their dresses. (To his publisher's credit, Jordan's books are fortunate among fantasy novels in not having covers that look like an explosion of a teenager's bedroom. The absence of such lurid artwork is, perhaps, part of their appeal.')

The concluding episode to book one of the Sunday Times No. 1 bestselling series The Wheel of Time, available for the first time in a YA edition. Action, adventure and excitement all the way in what is quite simply the greatest fantasy epic ever.