Items related to Sally Clarke's Book: Recipes from a Restaurant,Shop...

Sally Clarke's Book: Recipes from a Restaurant,Shop and Bakery 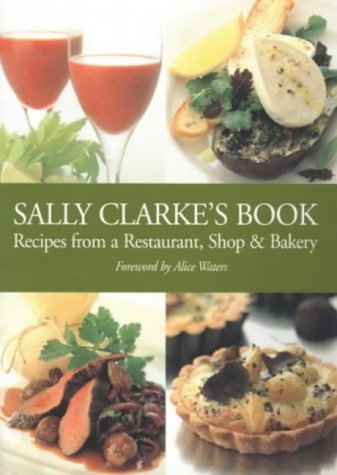 Sally Clarke's cooking is of the utmost simplicity; everything depends on the absolute freshness and quality of the ingredients. It is firmly rooted in Mediterranean and California traditions, using the day's best produce in a light, contemporary style that has gained accolades, awards and rave reviews since her now world-famous restaurant, Clarke's, opened its doors in the mid 1980s in London. But at long last the rest of us have caught up with her and her philosophy. Never before has this book been so meaningful or useful. Any cook will learn a great deal and for those now following the contemporary food culture which preaches seasonality and terroir, it is a 'must-have' cookbook which won the coveted Glenfiddich Award when it was first published. This collection of her creations, arranged by season offers heaps of excellent modern recipes, and an introduction to how you, the home cook, can produce her signature dishes.

Is Sally Clarke the coolest chef in London? The answer would depend on a number of factors: the austere elegance of her restaurant/bakery/food shop in South Kensington; the fact that she was among the first, if not the very first, to import the subtly hedonistic, visionary Californian style of Alice Waters; that she herself would probably never even contemplate the question; and now Sally Clarke's Book. Clarke's cooking is of disarming simplicity, everything depending (rather unfairly, the supermarket-reliant home cook might feel) on absolute freshness and quality of organically-grown ingredients. Famously, following the example of Waters at Chez Panisse, her menus offer no choices. But who would turn down "Parsley Soup with Morel Mushrooms and Creme Fraiche", or "Slow-Baked Duck Leg with Onion Marmalade, Duck-Fat Roasted Potatoes and Bitter-Leaf Salad", or "Baked Vanilla Cream with Armagnac Prunes and Ginger Florentines"? Or "Soup of Five Tomatoes and Three Beetroots"? Or "Wild Mushrooms Baked in Cream with Gorgonzola Mascarpone"? Or "Baked Beans"? (Baked beans!) This is simplicity arrived at by distillation to essentials, by stripping away the inessential. Clarke's food is seriously pleasurable. Any cook will learn a great deal from her book. The answer? Of course she is, but the question is meaningless. --Robin Davidson

"'The essence of simplicity and balance' Rowley Leigh, Sunday Telegraph; 'Modern cooking at its best.....seasonal, simple and dead sexy' Matthew Fort, The Guardian"