Items related to The Truth About Vaccines: How We Are Used as Guinea...

Richard Halvorsen The Truth About Vaccines: How We Are Used as Guinea Pigs Without Knowing It

The Truth About Vaccines: How We Are Used as Guinea Pigs Without Knowing It 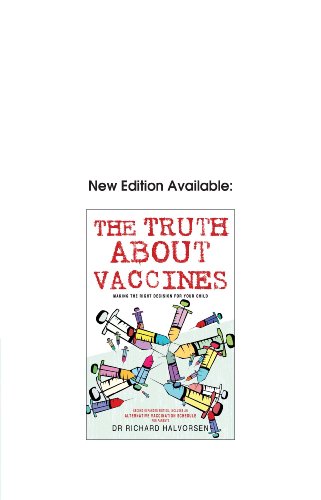 The overwhelming benefits of childhood vaccinations appear indisputable. They ve saved millions of lives and are revered as one of the greatest public health interventions of all time perhaps even the greatest success story of modern medicine. BUT IS IT TRUE? GP, and father of two, Richard Halversen has spent five years researching and writing this alarming study of vaccines: do they work, do we know enough about them, are they safe, what are the risks, are there ways of making vaccines safer? 'I am investigating what we patients and doctors alike are not being told. I am deeply disturbed by what I have found and how information about our health is increasingly held ransom to vested interests rather than freely available ... this book had to be written to inform parents, honestly, and without bias, so that they can form their own decisions.'

Dr Richard Halvorsen has been deeply involved in vaccination issues since 2000. He is one of the few family doctors in Britain to offer the three MMR vaccines separately, and was instrumental in raising awareness of the dangers of mercury. A GP in the NHS for over 25 years, he contributes regularly on health-related subjects to the national and medical media. He also runs the successful BabyJabs clinic in London (www.babyjabs.co.uk).

We no longer entirely trust what we are being told by medical experts, particular when vaccines are concerned. Once the pinnacle of medical achievement, vaccines are denting our belief in medicine. As was the case with BSE, we lurch from scare to scare while government action appears to increase the confusion at large rather than resolve it. In a series of investigations to get to the heart of the matter, GP Richard Halvorsen speaks to health officials, researchers, fellow GPs and parents to uncover the truth about vaccines. In an alarming pattern of discovery, he finds that GPs are not being accurate information and often live in fear of being seen to criticise. Medical researchers who are there establish the truth often find that impartial research is not allowed, while there is sphinx like silence from health authorities why the cheapest vaccine seems to prevail even though it is frequently not the safest vaccine. Alarmingly, a new threat is on the horizon, in pharmaceutical companies who - hungry for new areas to profit from - have discovered vaccines using fear as their marketing tool.

Most damningly, he has uncovered irrefutable evidence of dangerous levels of heavy metals in common vaccines.

1. The Truth About Vaccines: How We Are Used as Guinea Pigs Without Knowing It