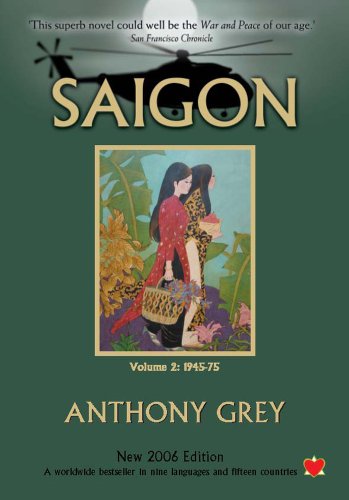 Vietnam's heady tropical landscape captivates 15 year-old Joseph Sherman on a hunting expedition to the French colony in 1925. He is lured back again and again by his enduring fascination for the country and for Lan, a beautiful mandarin's daughter he could never forget. Over five haunting decades Joseph's life becomes deeply enmeshed with Vietnam's turbulent, war-torn fate - until he attempts to salvage something of lasting value during the final desperate helicopter scramble to flee defeated Saigon.

This superb novel could well be the War and Peace of our age - San Francisco Chronicle. The ringing irony of Saigon is that a major work of fiction was required to adequately explain the fundamental tragedy of the United States involvement in Vietnam - this is a novel of terrible importance - Kansas City Star. One of the most memorable love stories of our time - West Coast Review of Books.

Anthony Grey became a foreign correspondent with Reuters after beginning a career in provincial journalism first in Scotland, then in Norfolk where he was born and educated. He reported on the Cold War from East Berlin, Prague, Warsaw, Budapest, Sophia and Bucharest for two years before being assigned to China in early 1967 to cover the Cultural Revolution. He was then the only British journalist resident in the Chinese capital and in the high summer of that year, through no fault or merit of his own, he became the focus of worldwide headlines when he was seized as a hostage by Mao Tse-tungs's Red Guards. He became the most publicised western prisoner of the Cold War era and the first international political hostage of modern times. Following his release, he went on to establish himself as a radio and television broadcaster and a best-selling international historical novelist, focussing mainly but not exclusively on the Far East.

Book Description Paperback. Condition: Good. The book has been read but remains in clean condition. All pages are intact and the cover is intact. Some minor wear to the spine. Seller Inventory # GOR003408013