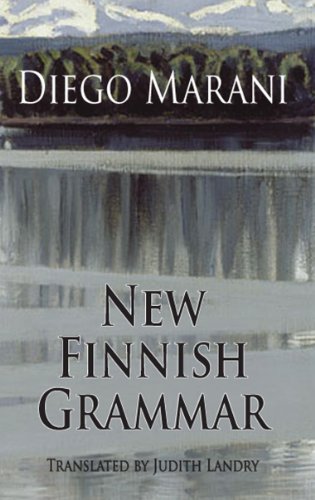 One night at Trieste in September 1943 a seriously wounded soldier is found on the quay. A doctor from the newly arrived German hospital ship, Pietri Friari, gives the unconscious soldier medical assistance. His new patient has no documents or anything that can identify him. When he regains consciousness he has lost his memory and cannot even remember what language he speaks. From a few things found on the man the doctor, who is originally from Finland, believes him to be a sailor and a fellow countryman, who somehow ended up in Trieste. The doctor dedicates himself to teaching the man Finnish, beginning the reconstruction of the identity of Sampo Karjalainen, leading the missing man to return to Finland in search of his identity and his past.

It was, naturally, the flatness of the title that attracted me: it bespoke, in its quiet confidence, a deep, rich and eventful inner life....I can t remember when I read a more extraordinary novel, or when I was last so strongly tempted to use the word genius of its author. The story is simple, as the best stories are. A man is found on a quayside in Trieste during the second world war, having been clubbed almost to death. A tag inside the seaman s jacket he is wearing bears a Finnish name: Sampo Karjalainen. When he regains consciousness he has no memory, no language. He is simply a consciousness devoid of context. The doctor on the hospital ship riding at anchor, though, is Finnish, and, with nothing else to go on, starts teaching his gradually recovering patient Finnish, in the hope that memories will be triggered, and he can rediscover who he is....all I can do, unless I go away and think about it for two weeks, a luxury unavailable to this reviewer, is simply to tell you to read it, and brace yourself for something special. --Nick Lezard's Choice in The Guardian

The title is odd, the cover is grey and the author is a besuited Eurocrat. But beneath these unflamboyant exteriors lie a colourful story. It has taken 10 years, the dedication of a small UK publisher and a perfect-pitch translation to deliver Diego Marani's first novel in English. When it came out in Italian, reviewers called it a masterpiece and it won several prizes. Since then Marani has written five more novels and become a Euro-celebrity for inventing a mock language called Europanto; a tossed salad of every European language without rules or grammar. New Finnish Grammar is definitely not a textbook. It's a beautifully written, intelligent novel which does, however, track the (notoriously difficult) language and history of the Finns. As a professional linguist, Marani was fascinated by Finnish and by the myth-building of a young nation-state. The story emerges from the turmoil of the Second World War. In 1943 a military doctor, Petri Friari, is working on a German hospital ship moored in Trieste harbour. A young soldier is brought to him, so badly wounded that he has no idea who he is. All he has is a jacket with the Finnish name SAMPO KARJALAINEN sewn into it. This leads Petri originally from Finland to believe the man is also Finnish; so he helps;Sampo to rediscover his language and his fatherland. The men are both exiles in different ways, both struggling with who they are. An archetypal identity drama unfolds as Sampo gradually learns to talk and walk again. Language is central to the narrative. Without it, we have no roots and no memory. As Sampo travels through war-torn Europe and back home to Finland, he has small breakthrough: 'Urgent as a desire to vomit, I felt the sudden need to speak'. In Finland, Sampo lodges with the ebullient Pastor Koskela, who believes that learning their myths and legends will anchor the shattered man. He is encouraged to fall in love, to switch off his brain and follow his heart. A warm-hearted nurse does her best, but fails. Still Sampo doesn't feel at home. 'I had a distinct suspicion that I was running headlong down the wrong road. In the innermost recesses of my unconscious I was plagued by the feeling that, within my brain, another brain was beating, buried alive.' Who is Sampo? This identity thriller delivers plot, bodies and clues as well as poetic musings on national and individual identity. Marani is obsessed by language and how it defines us. Here's a gifted European linguist also gifted at describing who we are as Europeans. --Rosie Goldsmith in The Independent

This is a desperately sad book. It takes its place beside Romantic stories of Kaspar Hauser and Wolf Boy of Aveyron which have haunted the European imagination for two centuries. I doubt that it could have been written without the example of Borges. However, Borges limited his narratives to a few pages. Marani, expanding a Borgesian idea to a novel, seems at times to lose his hold on the reader. Yet what he has produced is still a cut above what passes for serious fiction in this country. Judith Landry is to be congratulated on her seamless translation from the Italian, and Dedalus for introducing English readers to a fascinating writer. --Gabriel Josipovici in The New Statesman

Diego Marani was born in Ferrara in 1959. He works as the Officer in charge of Cultural Diplomacy at the European Union in Brussels. He writes columns for various European newspapers about current affairs in Europanto, a language that he has invented. His collection of short stories in Europanto, Las Adventures des Inspector Cabillot has been published by Dedalus. In Italian he has published eight novels, including the highly acclaimed trilogy New Finnish Grammar (Dedalus 2011), The Last of the Vostyachs (Dedalus 2012) and The Interpreter (Dedalus 2016) which have found worldwide success. His latest novel, a detective novel with a difference, God's Dog was published by Dedalus in 2014.

Book Description DEDALUS LTD, United Kingdom, 2011. Paperback. Condition: New. Reprint. Language: English. Brand new Book. Triese, 1943: an unconscious soldier is revived in hospital, but he has lost his memory and cannot even remember his own language. With no documents about his person it will be hard to identify him. The doctor who treats him is originally from Finland and, believing his patient to be a countryman, resolves to teach him Finnish. Seller Inventory # AAO9781903517949