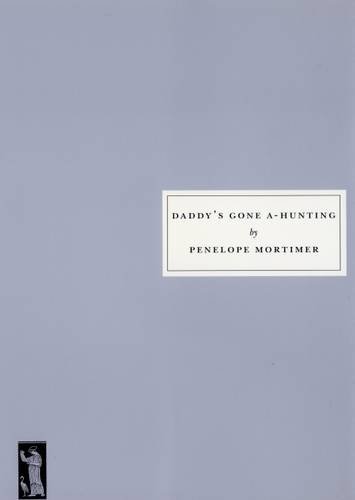 "Daddy's Gone A-Hunting" is about the expectations of women, about a house-bound mother reluctantly (desperately) at home all day, in contrast to her daughter who has escaped, to university and then, we can assume, to a job. 'The book came out at a time,' writes Valerie Grove (author of the recently published "A Voyage Round John Mortimer") in the Preface, 'when the impact of the new wave of feminism, which would change everything under the banner of women's liberation, had not yet arrived'.In Ruth Whiting's commuter-belt village 'the wives conform to a certain standard of dress, they run their houses along the same lines, bring their children up in the same way; all prefer coffee to tea, all drive cars, play bridge, own at least one valuable piece of jewellery and are moderately good-looking.' Yet Ruth is on the verge of going mad. A 'nervous breakdown' would be a politer phrase, but really she is being driven mad by her life and her madness is exacerbated by everyone's indifference to her plight.Although "Daddy's Gone A-Hunting" is at times excuciatingly funny in its caustic dissection of the people among whom the Whitings live, it is also a profound study of female isolation.As the critic Judy Cooke has pointed out, Penelope Mortimer's novels were 'intense, imaginative explorations of an inner world. It is an enclosed world, dominated by fear, in which physical experiences such as sterilisation and abortion isolate her characters from their fellow beings and are metaphors for a deeper spiritual isolation.'