Items related to God and My Right (Methven's Classic Historical... 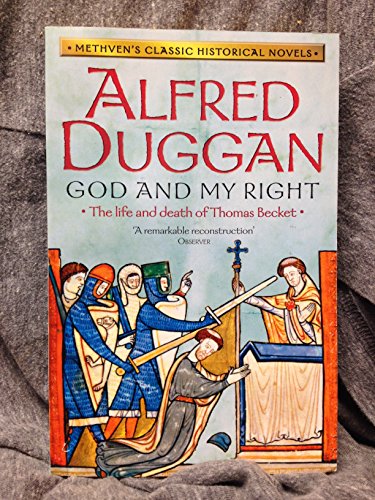 The clash of the Two Swords, of spiritual and temporal power, rings through the 12th century. In England its most famous instance was the dispute between Henry II and the Archbishop of Canterbury, a complicated story which cannot be understood unless the backgrounds of the two antagonists are brought to life. The boyhood of the ambitious Thomas of Cheapside and the conquest of the country by the passionate young King: their early friendship; the development of the rift between them; the many attempts to find a formula of reconciliation; and finally the murder in Canterbury and its aftermath, are all brilliantly enacted under the direction of this extraordinary author.

'It is rather as though the talents which made I, Claudius and The Forsyte Saga were fused into a single, quite new and individual creation' Evelyn Waugh in The Spectator

'A dramatic novel of the struggle between the spiritual and temporal powers in England in the twelfth century . . . As a reconstruction of the period this is marvellously well done.' Sphere

The life and death of Thomas Becket

Historian, archaeologist and novelist Alfred Duggan wrote historical fiction and non-fiction about a wide range of subjects, in places and times as diverse as Julius Caesar's Rome and the Medieval Europe of Thomas Becket.

Although he was born in Argentina, Duggan grew up in England, and was educated at Eton and Balliol College, Oxford. After Oxford, he travelled extensively through Greece and Turkey, visiting almost all the sites later mentioned in his books. In 1935 helped excavate Constantine's palace in Istanbul.

Duggan came to writing fiction quite late in his life: his first novel about the First Crusade, Knight in Armour, was published in 1950, after which he published at least a book every year until his death in 1964. His fictional works were bestselling page-turners, but thoroughly grounded in meticulous research informed by Duggan's experience as an archaeologist and historian.

Duggan has been favourably compared to Bernard Cornwell as well as being praised in his own right as 'an extremely gifted writer who can move into an unknown period and give it life and immediacy.' New York Times

Book Description Paperback. Condition: New. Select Expedited Shipping (just $3 more) to get your book as fast as possible!Clean, unmarked copy. In excellent shape! I can send expedited rate if you choose; otherwise it will promptly be sent via media rate. Got any questions? Email me; I'm happy to help!. Seller Inventory # SKU1036589