Items related to By the Ionian Sea: Notes of a Ramble in Southern Italy... 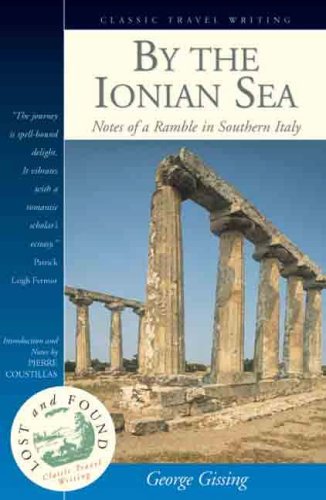 In 1897 the Victorian novelist George Gissing undertook a brief but eventful journey in southern Italy. His itinerary took him from Naples to Reggio di Calabria, via Paola, Cosenza, Crotone and Squillace, through the area once known as Magna Graecia. Meditating on the vestiges of Greco-Roman civilization, Gissing visited tombs and temples, museums and cathedrals, in search of the imprint of antiquity and "that old world which was the imaginative delight of my boyhood." The result was By the Ionian Sea, first published in 1901. Gissing's journey by boat, train, and carriage revealed not just the ruined glories of a classical past, but also the hardships of rural life in turn-of-the-century rural Italy. Meeting poverty-stricken peasants and corrupt local officials, he endured discomfort, danger and illness in a remote and little visited corner of Europe. Yet throughout he appreciated the warmth and generosity shown to him by local people, curious about this solitary stranger. By turns lyrical and melancholic, Gissing's masterpiece of travel writing alternates between light and dark, life and death, Paganism and Christianity. Looking at Italy in both its classical and contemporary dimensions, By the Ionian Sea celebrates Calabria's rich cultural past and beautiful landscapes while providing a candid account of the region's hardship and poverty. More than a century after its first publication, this is the first critical edition of the book in English.

It takes only a few pages of Gissing's solitary travel book ... to establish quite how loudly the tocsins of the Ancient World clanged in this late-Victorian ear. --Times Literary Supplement

(The editor's) devotion to Gissing is boundless and it has paid off. With its precise notes and photographs, the Signal edition is surely definitive. --The Spectator

GEORGE ROBERT GISSING (1857-1903) was the author of 22 novels, including the partly autobiographical New Grub Street (1891). PIERRE COUSTILLAS is professor emeritus at the University of Lille and an authority on Victorian literature.

1. By the Ionian Sea: Notes of a Ramble in Southern Italy (Lost & Found)