Items related to Aberfan - The Days After: A Journey in Pictures

I. C. Rapoport Aberfan - The Days After: A Journey in Pictures

Aberfan - The Days After: A Journey in Pictures 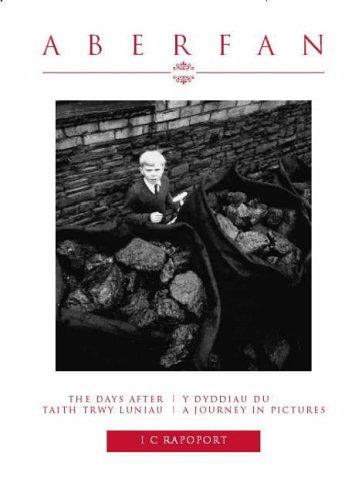 The book opens with an introduction by the photographer and is closed with an insightful afterword by Dr. Jeni Williams I.C.Rapoprt's sensitive photographs are beautifully judged, high quality images, they do not shock but seek to suggest lives beyond their representations. The figures they commemorate are allowed the dignity of being people rather than victims. As social history, they construct a narrative of development that is ultimately positive even though some of the individual images are so delicately, tragically moving. These pictures show, not only the community in its devastation - again not as victims- but in its social and historical particularity. The interiors, the clothes, the miners going underground, the woman holding a baby in a shawl: all these are part of something lost also.

Rapoport's involvement is apparent in every picture and comes through to the observer with impact and conviction. --Jacob Deschin, New York Times

I C Rapoport was born in The Bronx, New York. He studied at Ohio University under Clarence White and assisted fashion photographer Robert Randall and LIFE photographer Nina Leen. He was stationed in the Pentagon and White House as military photographer during the JFK administration and has worked for PARIS-MATCH, LIFE, TIME, Newsweek and National Geographic