Items related to SAC in the UK: Reflex, Refuelling, and Reconnaissance,... 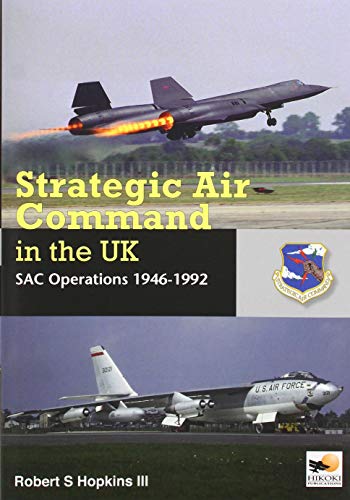 2. Strategic Air Command in the Uk

Book Description Crecy Publishing, United Kingdom, 2019. Hardback. Condition: New. Language: English. Brand new Book. Throughout its 46-year history, Strategic Air Command (SAC) was inextricably linked to the United Kingdom. Early SAC bombers such as B-29s and B-36s deployed routinely to England in order to reach their targets in the Soviet Union and SAC B-47s became regular fixtures at British bases. SAC tankers ranging from the KB-29 and KC-10 to the ubiquitous KC-135 provided refueling support not only to SAC bombers but fighters and transports from dozens of NATO and European nations, including the Royal Air Force and the Fleet Air Arm. Most famously the reconnaissance fleet of RB-50s, RB-47s, RC-135s, U-2s, and SR-71s brought a sense of intrigue to SAC operations from the United Kingdom. All in all, SAC was a dominating presence in the story of British Cold War airpower. This history of that involvement begins with an introductory essay placing the SAC presence in England in historical context. Each of the narrative chapters is profusely illustrated and the photos are accompanied by expansive captions, maps, and operational details. Robert Hopkins, a former SAC pilot and the noted author of Crecy titles on the KC-135, B-47 and strategic aerial reconnaissance, offers unique historical insights into SAC operations in the UK in this fascinating new account of its activities and the aircraft it operated. Seller Inventory # AAZ9781902109565

Book Description Hardcover. Condition: New. Hardcover. Throughout its 46-year history, Strategic Air Command (SAC) was inextricably linked to the United Kingdom. Early SAC bombers such as B-29s and B-36s deployed routinely to England in order .Shipping may be from multiple locations in the US or from the UK, depending on stock availability. 224 pages. 1.226. Seller Inventory # 9781902109565

7. Strategic Air Command in the Uk