Items related to It Hurts: New York Art from Warhol to Now

It Hurts: New York Art from Warhol to Now 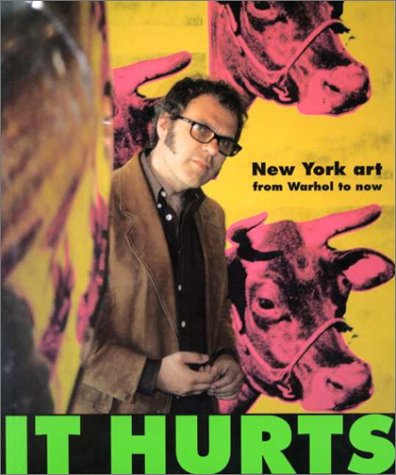 Applying the same perceptive wit that made "Blimey!" such a success, Matthew Collings turns his attention to the New York art scene covering the critics, artists and dealers from the 1960s through to the present day. From Warhol to the super-brats of the eighties like Koons and Schnabel right up to the young players of the nineties, they are all brought to life in this readable but thoughtful book.

It Hurts sees Matthew Collings bring his ironic and informed eye to, as the subtitle proudly proclaims, New York Art from Warhol to Now. New York has long been a prime pole of world art and not only because it has long been the centre of the world art market. Collings takes up the story after Rothko, Frankenthaler, Pollock and all the artists valorised by Clement Greenberg led the pack and starts from when Warhol's Pop Art began to dominate. It Hurts offers all the pleasures one always expects from Collings: stylistically knowledgeable, easy-to-read, arch, questioning, pithy, but suffers, as does all his work, from the overbearing feeling that we are simply reading a shopping list of artists and a digest of their key concerns. Collings, to his credit, and as he does so successfully in his YBA (young British artists) book Blimey!, manages to look incisively at a huge range of artists, from minimalists like Donald Judd, Carl Andre, and Sol Lewitt through Frank Stella, Robert Rauschenberg and Alex Katz to Schnabel's neo-expressionism on to 80s icons like Jeff Koons and through to contemporary artists like Cindy Sherman. He shows how modern art has developed, how different movements have overlapped, how a response to the perceived machismo and idealism of the Abstract Expressionists became Pop and how its sensibilities have dominated since. But none of these issues are dealt with fully or concretely and important side issues that help explain modern art's trajectory (neo-dada or auto destructive art, or Fluxus which brought into vogue the Happenings that led to the banal dead-end of Performance Art) are either ignored or given curiously short shrift. As ever Collings does a great job at romping through the names involved in the production of modern art with humour and intelligence: he provides a lousy map but a compelling overview.--Mark Thwaite