Items related to Under the Guns of the Red Baron: Complete Record of...

Under the Guns of the Red Baron: Complete Record of Von Richthofen's Victories and Victims 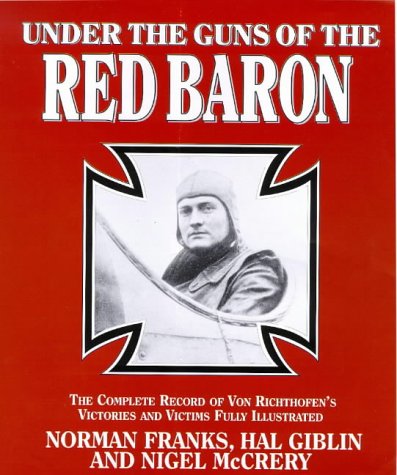 This is not a study of von Richthofen's life or death, but of the men he shot down. It is an up-to-date reference book covering the 123 men von Richthofen is reputed to have brought down while amassing his score of 80 victories over Allied aircraft between September 1916 and April 1918. The backgrounds of the men he fought are documented, and the later lives of those who survived the encounter with the Red Baron are also fully reported.

A very valuable contribution to our greater knowledge of the war in the air - a brilliant production! --Air Pictorial

Norman Franks is a respected historian and author. Previous titles for Pen and Sword include InThe Footsteps of the Red Baron (co-authored with Mike OConnor), The Fighting Cocks, RAF Fighter Pilots Over Burma, Dogfight, The Fallen Few of the Battle of Britain (with Nigel McCrery) and Dowdings Eagles. Over the course of his career, Frank has published some of the most compelling works on First World War fighter aviation, being one of the worlds leading authorities on the subject. He lives in Bexhill-on-Sea, East Sussex. Born in 1953, Nigel McCrery travelled extensively during his childhood as his father was in the RAF. They settled in Nottingham. He served in the Nottinghamshire Constabulary between 1978 and 1987. He then read History at Trinity College, Cambridge and joined the BBC graduate entry course. He has written or been responsible for a number of highly successful BBC series and films including Silent Witness, New Tricks and All The King's Men. He has written over a dozen novels. Into Touch - Rugby Players Killed in The Great War, Final Wicket - Cricketers Killed in The Great War, The Coming Storm - Test and First Class Cricketers Killed in World War Two and The Extinguished Flame - Olympians Killed in the Great War are in print with Pen and Sword Military. Nigel lives in Nottingham.

1. Under the Guns of the Red Baron: Complete Record of Von Richthofen's Victories and Victims

2. UNDER GUNS OF THE RED BARON: COM

3. UNDER GUNS OF THE RED BARON: COM