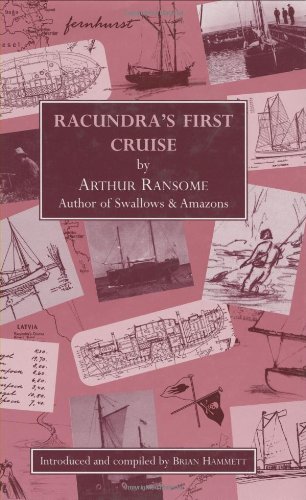 This new edition of Racundra's First Cruise includes the original maps, text and photos from the 1923 first edition, of which only 1500 copies were printed. The book also contains a detailed introduction detailing Ransome's Baltic sailing in Slug and Kittiwake and includes unpublished articles and essays together with many original Ransome pictures and present day photographs of the area. The manuscript has been researched, edited and introduced by Brian Hammett, who received critical acclaim for his work on Racundra's Third Cruise. Details of Racundra's life after Ransome are also included. It has the full support of Ransome's literary executors who are delighted to see it republished.

"Houses are but badly built boats so firmly aground that you cannot think of moving them. They are definitely inferior things, belonging to the vegetable not the animal world, rooted and stationary, incapable of gay transition. I admit, doubtfully, as exceptions, snail-shells and caravans. The desire to build a house is the tired wish of a man content thenceforward with a single anchorage. The desire to build a boat is the desire of youth, unwilling yet to accept the idea of a final resting-place."

Included in this new edition are the original maps, texts and photographs of the 1923 first edition of Racundra's First Cruise. There is an extended introduction, which includes details of Ransome's previous Baltic sailing, the story of Racundra, how he came to write the book, and previously unpublished Ransome essays and photographs.

Brian Hammett has compiled this unique edition of Racundraa s First Cruise. The preface leads us into a treasure trove of unpublished writings, essays and photographs. The life of Ransomea s beloved Racundra is chronicled to its conclusion and there is an explanation of how he came to write the book. The original illustrations are enhanced by the inclusion of present--day photographs of the same locations. Brian Hammett researched the introduction by following Racundraa s route through Latvia and Estonia in his 33 foot gaff AVOLA.