Items related to The Last Days of T.E. Lawrence: A Leaf in the Wind

Marriott, Paul The Last Days of T.E. Lawrence: A Leaf in the Wind

The Last Days of T.E. Lawrence: A Leaf in the Wind 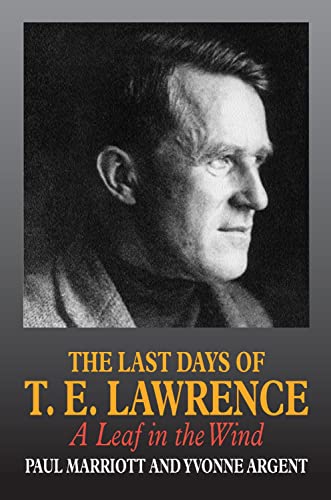 "It is quiet here now, and I feel as though I were fixed in my cottage for good. It is as I thought ... something is finished with my leaving the RAF. ... It gets worse instead of healing over ... At present the feeling is mere bewilderment. I imagine leaves must feel like this after they have fallen from their tree and until they die." The Last Days of T.E. Lawrence is a chronicle of the time from when Lawrence of Arabia left the RAF up to his fateful motorcycle accident on 13 May 1935. Much of the story is told in Lawrence's own words, from diaries and letters. It covers his time at Clouds Hill, the picturesque cottage in Dorset, where Lawrence intended to retire. Influenced by Lawrence's last and unpublished writing project, "Leaves in the Wind," A Leaf in the Wind reveals his state of mind as he prepared to leave the RAF. Travelling on his Brough Superior motorcycle along a narrow Dorset lane, Lawrence collided with two pushbikes. An official witness told of Lawrence travelling fast, and swerving to avoid a black car coming in the opposite direction. This book painstakingly fits together all the evidence to determine the truth of the motorcycle crash that led to the death of Lawrence of Arabia. For the first time a detailed record is set down covering the last six days before the accident. Meticulously researched by Paul Marriott and Yvonne Argent, their painstaking investigations reveal many new insights into Lawrence's life, activities and interests.

The Last Days of T.E. Lawrence This biography covers the last days of T.E. Lawrence, up to and following his fatal motorcycle accident in 1935. The authors offer new insights into Lawrence's life, activities and interests and aim to shed light on his mysterious death. Full description

A Leaf in The Wind covers the last days of T E Lawrence (Lawrence of Arabia) up to and following his mysterious and fatal motorcycle accident on the 13th of May, 1935. New evidence discovered by the authors questions the original story published at the time, and sheds new light on his tragic death. Meticulously researched over several years these painstaking investigations have revealed many new insights in Lawrence's life, activities and interests, some of which may surprise and offend many people. The documentary and photographic evidence encompasses some 60 plates, maps and figures, and for anyone with an interest in T E Lawrence this book will be essential reading.

3. The Last Days of T.E. Lawrence: A Leaf in the Wind [Paperback] Marriot, Paul and Argent, Ybonne