Items related to An Introduction to Wittgenstein's "Tractatus":... 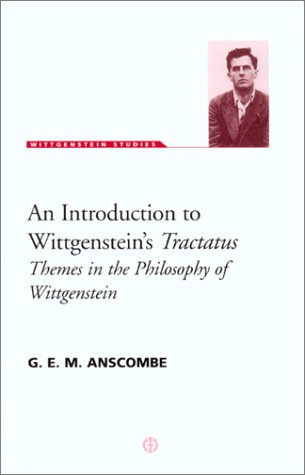 Anscombe guides us through the Tractatus and, thereby, Wittgenstein's early philosophy as a whole. She shows in particular how his arguments developed out of the discussions of Russell and Frege. This reprint is of the fourth, corrected edition.

Anscombe (1919 2001) read classics and philosophy at St Hugh's College, Oxford from 1937 to 1941 in which year she married the philosopher Peter Geach. She subsequently researched in philosophy at Newnham College, Cambridge where she became a student and friend of Ludwig Wittgenstein. One of his literary executors, she played a large part in editing his unpublished works and was their principal English translator. In 1946 she returned to Oxford as a University Lecturer in 1951. From 1970 until her retirement in 1986 she held the Chair of Philosophy at Cambridge.

Book Description St. Augustine's Press, 2001. Paperback. Condition: VERY GOOD. Pages are intact and are not marred by notes or highlighting, but may contain a neat previous owner name. The spine remains undamaged. Supplemental materials are not guaranteed with any used book purchases. Seller Inventory # 189031854X_abe_vg

Book Description St. Augustine's Press, 2001. Paperback. Condition: GOOD. Has little wear to the cover and pages. Contains some markings such as highlighting and writing. Supplemental materials are not guaranteed with any used book purchases. Seller Inventory # 189031854X_abe_gd