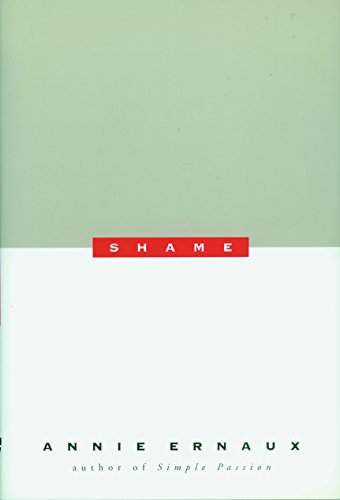 A dazzling novel which tells the story of a twelve-year-old girl who sees her father attempt to kill her mother. The moment lives inside her, indeed it cuts through her like an axe. Over time, the memory cools until it is just like a snapshot one might carry in a purse but the cut is still there and eventually she finds that her whole being has grown around it like a tree that has been struck by lightning and survived. Over 100,000 copies sold in France.

"My father tried to kill my mother one Sunday in June, in the early afternoon". Shame begins as the story of a twelve-year-old girl, but it is also about the storyteller, a mature woman, the author herself. The violent moment lives inside her. The trauma comes at a moment when she is still so close to her mother and father that the threatened act of violence is incomprehensible. It cuts through her like an axe. Over time, the memory cools until it is just a snapshot she carries in her purse, unchanging even after years have passed and the twelve-year-old girl has grown into an orgasmic woman and a writer. Years later the cut is still there, but her whole being has grown around it like a tree that has been struck by lightning and survived.

Born in 1940, ANNIE ERNAUX grew up in Normandy, studied at Rouen University, and began teaching high school. From 1977 to 2000, she was a professor at the Centre National d'Enseignement par Correspondance. Her books, in particular "A Man's Place" and "A Woman's Story," have become contemporary classics in France. She won the prestigious Prix Renaudot for "A Man's Place" when it was first published in French in 1984. The English edition was a "New York Times" Notable Book and a finalist for the "Los Angeles Times" Book Prize. The English edition of "A Woman's Story "was a "New York Times "Notable Book.