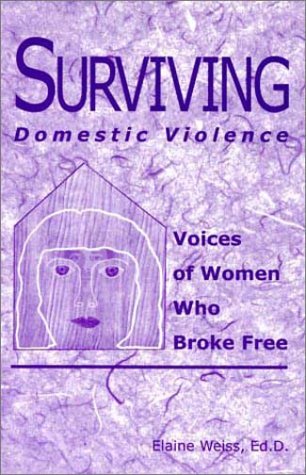 "The book describes the heroic, quiet courage and determination these battered women demonstrated when, against all odds, they not only leave their abusers, but rebuild their lives and identities to become fulfilled, trusting, and competent professionals, wives, and mothers."

"Early in the marriage, I was too immature to recognize that damage could occur emotionally to my son. But as Bobby got older, and I matured, then I knew I didn't want him to be exposed to any more of this. So my job was to find a way to get free. And then I just started plotting, and biding my time till I was secure enough to let the plan unfold.' Carolee Curtis, Hospital Administrator "My mother said, Judy, he has an invisible whip that he's just whipping you with all the time.' I thought, you know, he has whipped me enough. I am not going to allow him to whip me any more." Judy North, First-Grade Teacher. "When I woke up in the hospital, I knew that I didn't deserve what he had been doing to me for all those years. It wasn't right. It wasn't my fault, and there was no way I'd ever want to be around him again." Maryellen Kasimian, Medical Student

This is not a reference text about domestic violence. It is not an
instructional manual on how to escape from a batterer. Plenty of these exist. It is a travel guide to a country no one visits willingly, the collective tales of past travelers making the landscape less threatening, less alien. People have always counted on stories to make sense of their lives. In 1997, I set out to gather a particular set of stories. I traveled across the country interviewing
women who were once in an abusive relationship, who left their abuser, and who went on to reconstruct their lives. It was far too easy for me to find these women. I met them everywhere: on airplanes, at conferences, in community board meetings, at religious services, in offices, schools, and hospitals. Their stories were difficult to hear.

Ultimately, though, the pain of the stories was balanced by the humor, insight, and remarkable courage of the women who shared them with me. To grasp the full reality of domestic abuse it must be approached, like a piece of sculpture, from multiple vantage points. No set of bare statistics, let alone the flat sound bites our society has come to call news, can capture its complexity: "Woman Knifed by Estranged Husband." "Lovers' Spat Ends Tragically." "Ex-Boyfriend Shoots Mom, Kids." We shudder, then quickly turn our attention elsewhere. As we avert our eyes, we assure ourselves that these dreadful events have no relevance to our lives.

An old folk tale describes a conversation between Truth and Story. Truth complains that her messages are not heard; when people see her, their eyes slide away. Story replies, "You are naked, ugly, and old. Although I am as old as you, I am well dressed and pleasing to the eye. People do not turn from me. They welcome me into their homes, they listen to my many voices, and they come to see for themselves what is true."

I hope the many voices in this book will convince you that these stories belong to all of us. Domestic abuse doesn't just happen "out there" somewhere it happens in our town, in our neighborhood, on our street. It happens to people we see at the supermarket, the movie theater, the ballet, the bowling alley, and the PTA board meeting. It happens to our friends, our coworkers, and our family members. Women who have experienced domestic abuse look just
like everyone else. They look just like me.

Abused women also look just like Jesusa Fox, who currently lives in a Salvation Army halfway house. A devout Catholic from the Philippines married to an ex-Marine, she was able to escape from her husband only by making the unendurable decision to leave her two sons behind. Her husband has threatened to kill her if she fights for custody; nevertheless, she is determined to get the boys back. Abused women look just like Judy North, a first-grade teacher from Nebraska who
remained with her abusive husband for ten years, until the night she finally stood up to him ...and woke up in the emergency room. Abused women look just like Whitney Benson, a Mormon college student from southern Utah. She worries about the scars on her face from her boyfriend's class ring; I worry about the scars on her soul from his carefully crafted campaign of criticism, intimidation, and punishing rape. And abused women look just like Andrea Hartley, a pediatrician in her late forties who considers herself extremely fortunate. Although the man she married when she was thirty proved to be extremely violent, the emotional support of her family, friends, and medical colleagues enabled her to leave him only four months later.

At first glance, the women who shared their stories with me appear to have little in common. They come from all walks of life. Some are well educated; others barely finished high school. Some come from wealthy families; others come from poor ones. Some witnessed terrifying family violence as children; others never heard an angry word. Some were raised by warm, supportive families; others by cold, distant families. Some married young; others married late. They worship in churches, in synagogues, or not at all. They come from big cities, small towns, farming communities, and suburbs.

What these women have in common is that each was in an intimate relationship with a man who abused her. Some were abused physically. Some were abused sexually. All were abused psychologically...the most devastating type of abuse, leaving the deepest wounds. Their stories only occasionally blaze with the dramatic pyrotechnics of afternoon talk shows. This is not a book about guns, knives, emergency rooms, or police reports. Many stories focus instead on the
subtle campaign of abuse, wearying and corrosive, which trapped their teller in a web of daily threat. Yet despite the humiliation, fear, and isolation, each woman managed to escape from her abuser. Theirs are stories, not of frailty, but of clarity, resourcefulness, and strength.

What these women have in common is an aftermath: a word derived from the Old English "after-mowth," the second growth or crop. Like the grass that springs back after mowing, the feelings of shame, self-blame, helplessness, and blind fury reappear sometimes as nightmares, sometimes as flashbacks, triggered by news reports, books, or movies. A woman who has been battered is never the same woman she was before it happened. Her history becomes woven into the fabric of her being. This should come as no surprise; it is equally true of a woman who has endured breast cancer, a woman who has given birth, a woman who has been widowed after loving and being loved long and well. What these women have in common is their determination to reconstruct their lives. They have all spent time and energy struggling to understand, to draw meaning from the abuse. We believe we've made progress by calling these women "survivors" instead of "victims."

And they are survivors, in the sense that their survival--their ability to not only function but prosper is worthy of note. But in calling them survivors, we lose sight of the fact that they were once simply people. Little girls. Teenagers. Women.