Items related to Mountains and Rivers without End

Mountains and Rivers without End 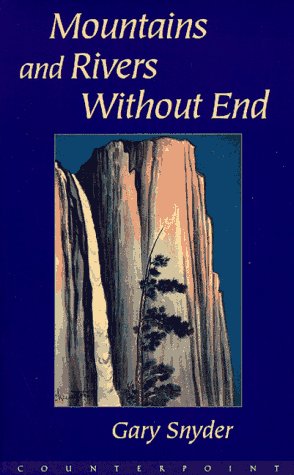 Poems deal with such topics as nature, Buddhism, art, and song

When this landmark work was first published, Gary Snyder was honored with the Bollingen Poetry Prize, the Robert Kirsch Lifetime Achievement Award, and the Orion Societys John Hay Award. Publishers Weekly named Mountains and Rivers Without End one of the best books of 1996. On April 8, 1956, Gary Snyder began work on a long poem entitled Mountains and Rives Without End. Initially inspired by East Asian landscape painting and his own experience within a chaotic universe where everything is in place, Snyders vision was further stimulated by Asian art and drama, Gaia history, Native American performance and storytelling, the practice of Zen Buddhism, and the varied landscapes of Japan, California, Alaska, Australia, China, and Taiwan.While a few individual sections of the poem have been published in literary magazines and a small bound collection, Snyders ardent fans have waited patiently through the past forty years for the completion of Mountains and Rivers Without End. The entire work appears for the first time in this volume.Traveling beyond its origins in the Western tradition of Whitman, Pound, and Williams, Mountains and Rivers is an epic of geology, prehistory, and planetary mythologies.

It is a poem about land and its processes, a book about wisdom, compassion, and myth, and a narrative work that is not quite like anything else. It will stand as a masterpiece of the long poem in American English. About the Author:

Gary Snyder won the Pulitzer Prize in 1975, was a finalist for The National Book Award in 1992 and the National Book Critics Circle Award in 2006. He won the Bollingen Prize in poetry, the Kirsch Lifetime Achievement Award, the John Hay Award, and most recently the Wallace Stevens Prize in 2012. He has lived in his homestead in the Sierra foothills of the Sierra Nevada since 1970.

1. Mountains and Rivers Without End

2. MOUTAINS AND RIVERS WITHOUT END

Book Description Counterpoint, Washington, D.C., 1997. Soft Cover. Condition: New. First Edition, First Printing. Stated First Edition, First Printing. BRAND NEW & Collectible. Frontispiece: Horizontal landscape painting, "Endless Mountains and Streams", Ch'i San Wu Chin of the Sung Dynasty, Cleveland Art Museum, from which the title of this long poem is taken. The first sectors of the poem was published in 1965 (publication records to rear) by 1974 Pulitzer prize (Turtle Island) winner Gary Snyder (1930 -); he was to continue working on until the late 1990s, during which the poet says ". my sense of of the poem has. been enlarged" by his own experiences. Snyder translates Wang Wen-wei's colophon/poem dated 1205, "The Fashioner of Things/ has no original intentions/ Mountains and rivers/ are spirit, condensed." The poem is in 4 Sectors, followed by notes. On reflection Gary Snyder has come to think of the poem ". as a sort of a sutra --- an extended poetic, philosophic, and mythic, narrative of the female Buddha Tara". Seller Inventory # 008819

4. Mountains and Rivers Without End

6. MOUNTAINS AND RIVERS WITHOUT END