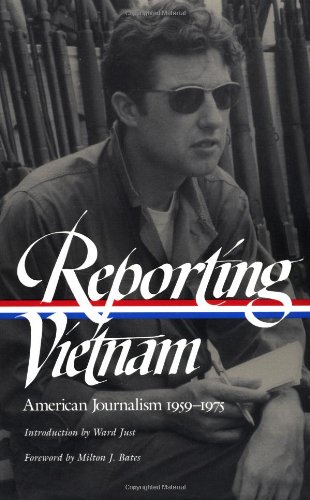 This one-volume selection, drawn from the original newspaper and magazine reports and contemporary books collected in the acclaimed two-volume hardcover edition, brings together the work of over fifty remarkable writers to create a powerful mosaic view of America's longest war. Reporting Vietnam follows events from the first American fatalities in 1959 through the Tet Offensive in 1968 to the fall of Saigon in 1975, recording the shifting course of the fighting, its impact on an increasingly fractured America, and the changing texture of American journalism.

Here are Homer Bigart David Halberstam, Stanley Karnow, and Neil Sheehan on South Vietnam in the 1960s; Thomas Johnson and Wallace Terry examining the changing attitudes of black soldiers; Sydney Schanberg on the fall of Phnom Penh; Philip Caputo on the last days of South Vietnam. Included as well are Norman Mailer at the March on the Pentagon, Doris Kearns on Lyndon Johnson's anguished decision-making, and James Michener's meticulous reconstruction of the Kent State shootings.

The volume includes a detailed chronology of the war, historical maps, biographical profiles of the journalists, notes, a glossary of military terms, and an index.

Gathers original newspaper and magazine articles to capture the immediacy of events as they happened during the course of the war.