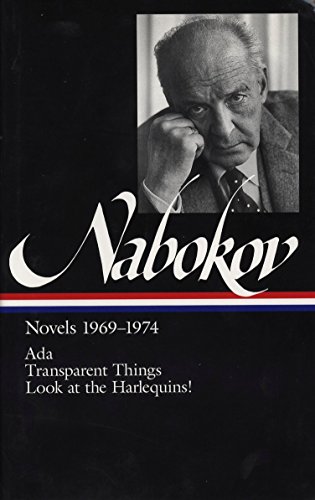 The library of America is dedicated to publishing America's best and most significant writing in handsome, enduring volumes, featuring authoritative texts. Hailed as the "finest-looking, longest-lasting editions ever made" (The New Republic), Library of America volumes make a fine gift for any occasion. Now, with exactly one hundred volumes to choose from, there is a perfect gift for everyone.

Ada, or Ardor: A Family Chronicle (1969), the longest of Nabokov's novels, is a witty and parodic account of a man's lifelong love for his sister. All of his favorite themes and most characteristic techniques are woven into this culminating work of Nabokov's imagination. Transparent Things (1972) is a haunting novella of the anguished life of Hugh Person, a young American editor and proofreader: his marriage, the murder of his wife, and his lone journey to uncover the truth about the past. With its multiple narrative voices and fusion of dream and memory, it is among the most formally experimental of Nabokov's works. Look at the Harlequins! (1974), Nabokov's final novel, concerns Vadim Vadimovitch N., a novelist very much like Nabokov himself. This ironic, intricate hall of mirrors, startling in its shifts of tone and off-key echoes of Nabokov's earlier books, often blurs the line between the worlds of reality and of literary invention. The texts of this volume incorporate Nabokov's penciled corrections in his own copies of his works and correct long-standing errors. They are the most authoritative versions available and have been prepared with the assistance of Dmitri Nabokov, the novelist's son, and Brian Boyd, Nabokov's distinguished biographer, who has also contributed notes and detailed chronology of the author's life based on new research.

After a brilliant literary career writing in Russian, Vladimir Nabokov (1899-1977) immigrated to the United States in 1940 and went on to an even more brilliant one in English. Between 1939 and 1974 he wrote the autobiography and eight novels collected by the Library of America in an authoritative three-volume set.

Brian Boyd is a Distinguished Professor in the Department of English at the University of Auckland, New Zealand, and is the author of Nabokov's Pale Fire: The Magic of Artistic Discovery.