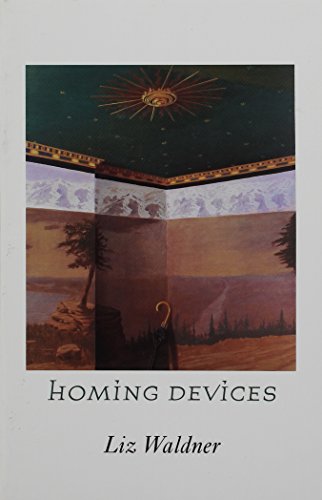 Poetry. Liz Waldner's HOMING DEVICES is "more of a wiry museum than a book" that takes turns in language either for its own sense of aversion or for the quality of the ride. The book is restless in its methods but tricky at the same time, drawing upon both historical and contemporary myth, allusions to high and low culture and personal efforts throughout. "HOMING DEVICES awakened me to how often I'm unused when I read, here I'm occupied, confused, satisfied" --Eileen Miles.

Liz Waldner was born in Cleveland, Ohio, and raised in rural Mississippi. She received a BA in philosophy and mathematics from St. John's College. She is the author of TRUST (Cleveland State University Poetry Center, 2009); SAVING THE APPEARANCES (Ahsahta Press, 2004); Dark Would (the missing person) (University of Georgia Press) winner of the 2002 Contemporary Poetry Series; ETYM(BI)OLOGY (Omnidawn Press, 2002); SELF AND SIMULACRA (2001), winner of the Alice James Books Beatrice Hawley Prize; A Point Is That Which Has No Part (2000), which received the 2000 James Laughlin Award and the 1999 Iowa Poetry Prize; and HOMING DEVICES (1998). Her poetry has appeared in journals such as Colorado Review, Denver Quarterly, New American Writing, Ploughshares, and VOLT. Her awards include grants from the Massachusetts Cultural Council, the Boomerang Foundation, and the Barbara Deming Memorial Money for Women Fund. She has also received fellowships from the Vermont Studio Center, the Djerassi Foundation, and the MacDowell Colony.

Book Description O Books, 1998. Paperback. Condition: Good. Connecting readers with great books since 1972. Used books may not include companion materials, some shelf wear, may contain highlighting/notes, may not include cdrom or access codes. Customer service is our top priority!. Seller Inventory # S_285987642