Items related to Wabi-Sabi: For Artists, Designers, Poets and Philosophers 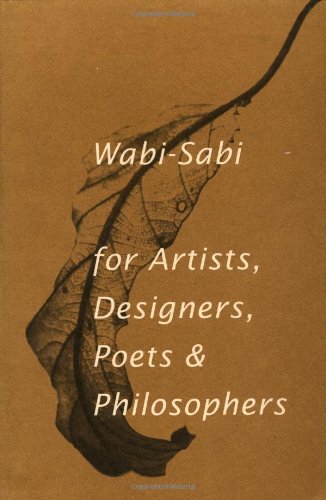 From the Introduction Wabi-sabi is a beauty of things imperfect, impermanent, and incomplete. It is a beauty of things modest and humble. It is a beauty of things unconventional. The immediate catalyst for this book was a widely publicized tea event in Japan. The Japanese aesthetic of wabi-sabi has long been associated with the tea ceremony, and this event promised to be a profound wabi-sabi experience. Hiroshi Teshigahara, the hereditary iemoto (grand master) of the Sogetsu school of flower arranging, had commissioned three of Japan's most famous and fashionable architects to design and build their conceptions of ceremonial tea-drinking environments. Teshigahara in addition would provide a fourth design. After a three-plus-hour train and bus ride from my office in Tokyo, I arrived at the event site, the grounds of an old imperial summer residence. To my dismay I found a celebration of gorgeousness, grandeur, and elegant play, but hardly a trace of wabi-sabi. One slick tea hut, ostensibly made of paper, looked and smelled like a big white plastic umbrella. Adjacent was a structure made of glass, steel, and wood that had all the intimacy of a highrise office building. The one tea house that approached the wabi-sabi qualities I had anticipated, upon closer inspection, was fussed up with gratuitous post- modern appendages. It suddenly dawned on me that wabi-sabi, once the preeminent high-culture Japanese aesthetic and the acknowledged centerpiece of tea, was becoming-had become?-an endangered species. Admittedly, the beauty of wabi-sabi is not to everyone's liking. But I believe it is in everyone's interest to prevent wabi-sabi from disappearing altogether. Diversity of the cultural ecology is a desirable state of affairs, especially in opposition to the accelerating trend toward the uniform digitalization of all sensory experience, wherein an electronic "reader" stands between experience and observation, and all manifestation is encoded identically. In Japan, however, unlike Europe and to a lesser extent America, precious little material culture has been saved. So in Japan, saving a universe of beauty from extinction means, at this late date, not merely preserving particul

An extended illustrated essay on the quintessential Japanese aestethic of imperfect and impermanent beauty. "Wabi-sabi" is presented as a protypical "complete" aesthetic, nature based and "soft" in contrast to the "hard" digital aesthetics of modern computer-age design.