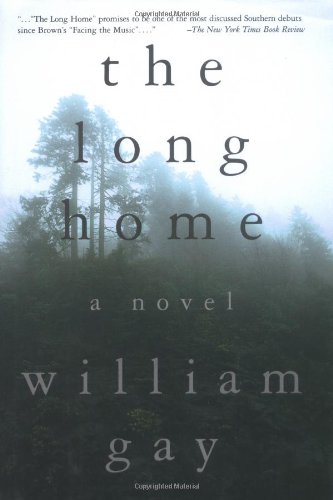 He lay on a tabled shelf of limestone and watched the slow, majestic roll of the fall constellations. He realized with something akin to regret that he had no names to affix to them though he'd known them all his life. The stars looked bright and close and earlier an orange harvest moon had cradled up out of the pines so huge he felt he could reach up and touch it. By its light the Mormon Springs branch was frozen motionless and it gleamed like silver, the woods deep and still. It seemed strange to lie here and listen to the sounds of the jukebox filtered up out of the darkness, windbrought and maudlin plaints, but no less real for being maudlin.

'Gay is a writer of remarkable talent... The Long Home promises to be one of the most discussed Southern debuts since Brown's Facing the Music in 1988.' The New York Times Book Review 'Just when it seemed that the superb writers of the US south could no longer surprise... along comes this astonishing, dark, offbeat novel possessing equal measures of weirdness and beauty... Gay's vivid prose and dramatic instinct create lasting images and human moments of genius. This is a far bigger book than many novels twice its size, and it deserves its place in a rich tradition.' Irish Times

William Gay lives in Hohenwald, Tennessee. His work has appeared in the Georgia Review, the Oxford Review, and The Best American Mystery Stories 2001. He is the author of the novels The Long Home, Provinces of Night and Twilight, described by George Pelecanos as 'a mythical dark-woods adventure, both horrific and comedic, with an astonishing language of its own'.