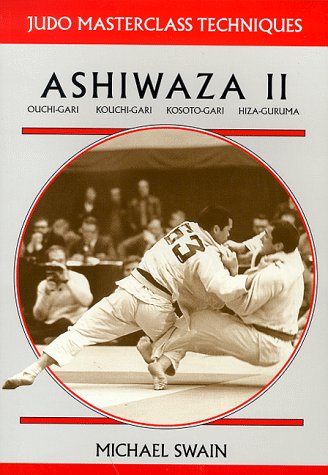 Ashiwaza is the heart of good judo and very few judoka progress far without one of the four techniques covered in Ashiwaza II. Ouchi-gari and kouchi-gari always figure relatively high in the scoring results in major championships because they can be used to great effect against decisive and awkward opponents.

But as America's lightweight champion Michael Swain shows, precision is crucial to success. As a noted stylist he used these techniques repeatedly against bigger and stronger men in both randori and competition. He explains how ouchi-gari in particular enabled him to survive when he first went to Japan to study judo as a raw teenager. On the way to his world title in 1987 he threw the Japanese champion with ouchi-gari.

The beginner starts with a reap or a hook. But a proper ouchi-gari, kouchi-gari, kosoto-gari or hiza-guruma as explained by Swain will open the door to a much deeper, richer understanding of these ashiwaza and to greater effectiveness on the judo mat.