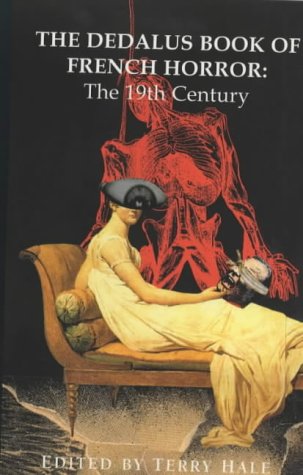 This anthology provides a representative selection of a century of French horror writing by such authors as Petrus Borel, Theophile Gautier, Gerard de Nerval, Charles Nodier, Guy de Maupassant, Charles Baudelaire, and J.K. Huysmans, most appearing for the first time in English. It traces the full development of a genre that initially appeared in the aftermath of the French Revolution, and has been used to explore the most terrifying aspects of science and social life.

2. The Dedalus Book of French Horror: The 19th Century

Book Description Paperback. Condition: Good. The book has been read but remains in clean condition. All pages are intact and the cover is intact. Some minor wear to the spine. Seller Inventory # GOR007739068

4. The Dedalus Book of French Horror: The 19th Century

Book Description Dedalus Ltd, United Kingdom, Cambs, 1996. Paperback. Condition: Very Good. The book has been read, but is in excellent condition. Pages are intact and not marred by notes or highlighting. The spine remains undamaged. Seller Inventory # GOR003077684

6. The Dedalus Book of French Horror: The 19th Century

Book Description Dedalus, 1998. Condition: Good. A+ Customer service! Satisfaction Guaranteed! Book is in Used-Good condition. Pages and cover are clean and intact. Used items may not include supplementary materials such as CDs or access codes. May show signs of minor shelf wear and contain limited notes and highlighting. Seller Inventory # 1873982879-2-4