Items related to The Courts of the Morning

John Buchan The Courts of the Morning

The Courts of the Morning 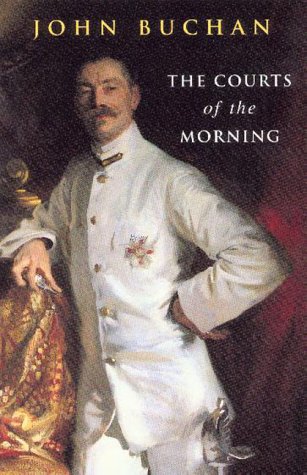 Begins in the pleasant atmosphere of a country house in the Scottish borders, where Richard Hannay is the guest of his old friend, Sandy Arbuthnot. The drama shifts to a small South American republic in the grip of a dictator. John Buchan is the author of The 39 Steps and Greenmantle.

A story of guerrilla war in a South American republic. The ruling junta and its powerful modern army, controlled by the mysterious Castor, are outwitted and defeated by the Indians and the descendants of the Spanish settlers. They are led by Sandy Arbuthnot, with John S. Blenkiron and Archie Roylance. They find themselves fighting for freedom against corrupt materialism, Castor’s dream of world influence, and his drugged henchmen. One of Jon Buchan’s best tales of adventure. First published in 1929, its war and strategy have clear echoes of the Arab Revolt; B. H. Liddell Hart put it on the reading list of his 'The Future of Infantry'.

1. The Courts of the Morning

Book Description Black and White Publishing, 2000. Paperback. Condition: Used; Good. Dispatched, from the UK, within 48 hours of ordering. This book is in good condition but will show signs of previous ownership. Please expect some creasing to the spine and/or minor damage to the cover. Seller Inventory # CHL3454218

2. The Courts of the Morning

Book Description Black and White Publishing Limited. Paperback. Condition: Good. A copy that has been read, but remains in clean condition. All pages are intact, and the cover is intact. The spine may show signs of wear. Pages can include limited notes and highlighting, and the copy can include previous owner inscriptions. At ThriftBooks, our motto is: Read More, Spend Less. Seller Inventory # G1873631200I3N00

3. The Courts of the Morning

Book Description Black and White Publishing, 1993. Condition: Good. This is an ex-library book and may have the usual library/used-book markings inside.This book has soft covers. In good all round condition. Please note the Image in this listing is a stock photo and may not match the covers of the actual item,500grams, ISBN:9781873631201. Seller Inventory # 7408164

4. The Courts of the Morning

5. The Courts of the Morning

Book Description Paperback. Condition: Very Good. The book has been read, but is in excellent condition. Pages are intact and not marred by notes or highlighting. The spine remains undamaged. Seller Inventory # GOR001120888

6. The Courts of the Morning

Book Description Paperback. Condition: Good. The book has been read but remains in clean condition. All pages are intact and the cover is intact. Some minor wear to the spine. Seller Inventory # GOR001746589

7. The Courts of the Morning

Book Description Black and White Publishing, 2000. Paperback. Condition: Very Good. This book is in stock now, in our UK premises. Photos of most of our books are available - please ask, as dustjacket and cover illustrations vary, and unless the accompanying image is marked 'Bookseller Image', it is an Abebooks Stock Image, NOT our own. Overseas buyers also note that shipping rates apply to packets of 750g and under, and should the packed weight of an item exceed this we reserve the right to ship via 'Economy', or request extra postage prior to fulfilling the order, or cancel. Seller Inventory # mon0000106914