Items related to Memories of Colne 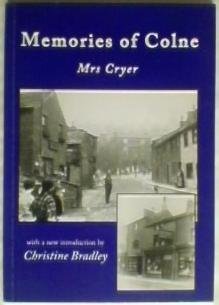 In 1910, Mrs. Cryer produced a series of articles for the ěColne and Nelson Timesî, recalling her memories of Colne in the 1850ís. She had a remarkable memory and recounted the names and details of most of the townís shop-keepers and their families. The book is a treasure trove for all those with family history interests in Colne in the middle of last century. To my delight, at the end of Chapter IV, I found mention of Miss Margaret Cragg, the sister of my great great grandfather. The book based on Mrs. Cryerís articles is now very rare, so the opportunity has been taken to reproduce it. This version has been produced from a photocopy of the book by computer scanning, using an optical character recognition programme. Computer scanning is never completely accurate, particularly with punctuation marks, and when working from a document with low contrast. While the final version has been subjected to proof reading and computer based spelling checks, a few errors may remain, for which I am responsible. Many of the sentences and paragraphs are very long and the division into chapters is somewhat arbitrary, but the book has been reproduced as written. The numbering of chapter XIII has been corrected and a few changes have been made to the format for reasons of clarity. The book itself contains a few photographs, illustrations and advertisements but no attempt has been made to reproduce them because my photocopies of them are of poor quality. The photographs are of leading citizens and dignitaries rather than the colourful characters whose stories Mrs. Cryer relates.

Book Description Paperback. Condition: Very Good. The book has been read, but is in excellent condition. Pages are intact and not marred by notes or highlighting. The spine remains undamaged. Seller Inventory # GOR005364067

Book Description Paperback. Condition: Good. The book has been read but remains in clean condition. All pages are intact and the cover is intact. Some minor wear to the spine. Seller Inventory # GOR009027784