Items related to Strangers in My Sleeper: Rail Journeys and Encounters...

Riordan, Peter Strangers in My Sleeper: Rail Journeys and Encounters on Indian Railways

Strangers in My Sleeper: Rail Journeys and Encounters on Indian Railways 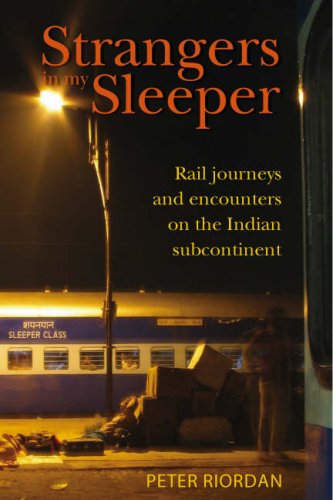 The gleaming iron threads that snake through the Indian subcontinent are the arteries transporting its lifeblood: a billion-plus people going about their daily lives. To Wellington journalist Peter Riordan the railways were the perfect means by which to melt among the people and engage them in conversation - to talk to the real, modern India, Pakistan, Bangladesh and Sri Lanka. Strangers in my Sleeper follows him around a vast land on a hard wooden seat and introduces his fellow travellers - sadhus, businessmen, flirting couples, secret policemen, holidaymakers, government officials, salesmen and many others. Their views on life, love, politics, progress and commerce, together with the ever-changing view through his window over the jungles, deserts, plains, mountains and teeming cities, paint an exquisitely coloured portrait of a people in motion.

Peter Riordan was born in 1957 in New Plymouth. After studying political science at Otago University he worked as a journalist in New Zealand and Australia. He and his family live in Wellington. Peter's first book, Motorcycle Masala (Hazard Press 2000), won the City of Brisbane/Singapore Airlines Asia Pacific Travel Writers Award.